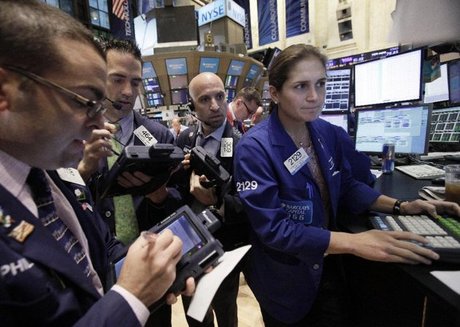 The modest decline followed a surge Thursday that put the Dow Jones industrial average on track for its best month since 1987.

Investors were reacting Thursday to a plan announced in Europe to defuse the Greek debt crisis. European leaders agreed to expand a regional bailout fund and will force banks to keep bigger cash buffers to protect against future losses. Banks agreed to forgive half of Greece's debt.

Hopes for Europe's crisis plan propelled the Dow Jones industrial average up 340 points on Thursday, its biggest jump since Aug. 11. The Dow is up 11.8 percent this month, the S&P 13 percent. Both indexes are on pace to have their best month since January 1987.

Thursday's stock rally led to a sell-off in Treasurys, which traders hold to protect their money when other investments are falling. Demand for Treasurys edged higher early Friday, pushing the yield on the 10-year Treasury down to 2.35 percent from 2.39 percent late Thursday. The yield remains close to a 10-week high reached on Thursday.

Markets have been roiled for months by fears about the impact of Europe's debt crisis. Greece couldn't afford to repay its lenders, and banks holding Greek bonds faced billions in losses. A disorganized default by Greece threatened to spook lenders to other countries with heavy debt loads such as Spain and Italy. Traders feared that a wave of defaults by countries would cause financial panic and mire the global economy.

Some analysts said Thursday's rally marked a turning point. They expect traders to focus on U.S. economic news after monitoring Europe for months. The government releases its jobs report for October next Friday. A news conference from Federal Reserve Chairman Ben Bernanke will offer clues about the Fed's economic outlook. Key reports on manufacturing and business sentiment are due out as well.

The economy grew at a 2.5 percent annual rate in the third quarter, the government said Thursday. That's too slow to bring down unemployment, but is far stronger than the first half of the year.

Some cautioned that the rally might not be sustained. They warned that the Europe deal lacks details, and merely buys leaders some time to address the thornier issues. One signal that the crisis threat still looms: Italy's borrowing costs continued to rise, signaling that traders remain worried about its financial health.

European markets alternated between gains and losses as traders turned a more skeptical eye to the crisis plan, and began to ask how it will work.