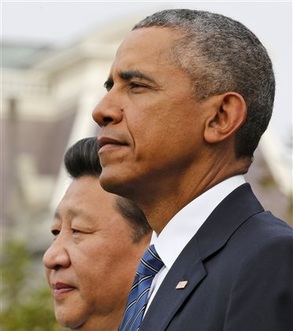 U.S. President Barack Obama met China's Xi Jinping at the White House on Friday and emerged with a climate change plan, despite tough talk on cyberspying and human rights.

Xi and his wife Peng Liyuan arrived at 1600 Pennsylvania Avenue to a 21-gun salute and full ceremonial military honors, underlining the huge symbolic importance of the state visit.

Washington and Beijing are at loggerheads over spying and China's claims in the South China Sea, but their relationship underpins the entire global economy.

And, with China the world's top polluter and America one of the worst per capita, their stance on climate change is key in the run-up to this year's UN summit in Paris.

The leaders emerged from the talks brandishing a joint statement committing their countries to emissions cuts and a "common vision ... pointing toward a low-carbon transformation of the global economy this century."

For its part, China confirmed in a joint statement that it "plans to launch in 2017 a national emission trading system covering power generation, steel, cement."

The United States meanwhile highlighted the finalization of its Clean Power Plan, which it said would "reduce emissions in the U.S. power sector by 32 percent by 2030."

China will also set aside $3.1 billion as a fund to help developing countries fight climate change.

The initiatives add to emissions curbs pledged last year by China and the U.S. in a bid to forge a U.N. climate pact, scheduled to be sealed in Paris in December.

Alden Meyer of the Union of Concerned Scientists said "these initiatives should contribute additional momentum towards a climate agreement in Paris."

And Rhea Suh, president of the Natural Resources Defense Council, said the United States and others should take inspiration from the Chinese measures.

"This is strong medicine. China is promising decisive action," she said. "It lays to rest the flawed argument that Chinese pollution is an excuse for U.S. inaction."

The climate change announcement was a clear success, and came despite Obama taking a firm tone on the other issues troubling the trans-Pacific relationship.

"Even as our nations cooperate, I believe and I know you agree, that we must address our differences candidly," Obama said as he welcomed Xi.

The U.S. leader stressed Washington's attachment to human rights, and tacitly referred to allegations that China's spies have hacked US firms for commercial gain.

"We believe nations are more successful and the world makes more progress when our companies compete on a level playing field," Obama warned.

And he called for international disputes to be "resolved peacefully" -- an implicit reference to China's disputed territorial ambitions in the South China Sea.

Xi's opening remarks were less pointed, but he warned of the need for mutual respect of each other's sovereign rights and the importance of economic cooperation.

"We have no choice but to seek win-win cooperation," Xi said. "Let us work hand in hand with great resolve to write a new chapter in China-US relations."

The two leaders were expected to hold a joint news conference following the talks.

Obama and held Xi a casual meeting on Thursday evening, shedding their ties and strolling out of the West Wing to Blair House, the president's official guest house.

Officials hoped that by starting off informally, the leaders would find time for a relaxed exchange of views.

"Far and away, the most constructive engagements they've had have been in their private dinners," said senior Obama national security aide Ben Rhodes.

This provides an opportunity, Rhodes said, to "put aside the talking points and actually get a window into one another's world view."

Xi -- who kicked off his US visit in Seattle, meeting with top corporate CEOs -- is seen in Washington as one of the strongest Chinese leaders in decades.

Even as the Chinese economy has slowed -- calling into question Xi and the Communist Party's technocratic bona fides -- the president has tightened his grip on power.

But his assertiveness has fueled a host of disputes that U.S. officials say risk throwing the delicately balanced relationship out of kilter.

"At any one time we are cooperating and competing," said one senior administration official.

Obama and Xi were also expected to look to highlight cooperation to curb Iran and North Korea's nuclear programs and tackling people-to-people ties.

An agreement is also expected to limit the risk of dangerous air-to-air military encounters.

On the eve of Xi's visit, U.S. officials said two Chinese fighter jets had passed dangerously close to an American spy plane in international airspace over the Yellow Sea.