Syria Rebels Insist No Role for Assad despite Western Overtures 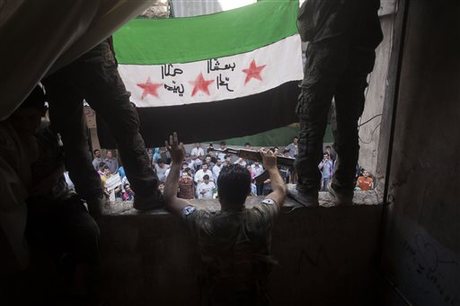 Syrian opposition forces say they will never accept President Bashar Assad's rule, after signs that Western powers may be willing to work with the embattled leader to end the war.

In recent weeks, long-time backers of Syria's uprising have suggested that Assad has a role to play in ending the four-year conflict, and could even stay on during a transitional period.

But for opposition figures and fighters on the ground, that idea is virtually sacrilegious.

"The regime continuing and Assad staying is a failure," said Ahmad Qura Ali, a spokesman for the powerful Islamist Ahrar al-Sham rebel group.

Activist Ibrahim al-Idlibi, who took part in the anti-government demonstrations that began in March 2011, said Syrians "will not accept that Assad stays as part of a transitional period".

"It's not possible to look at a terrorist killer as a protector or provider of security," he added.

Assad's departure has been a key demand of the opposition since the uprising began.

Political opponents and rebels alike point to the so-called Geneva I peace conference held in 2012, at which world powers called for a transitional government that would have full executive powers.

The opposition and its international backers have long said that meant Assad would have no role in any transition, but in recent weeks Western powers have softened that interpretation.

The West has been rattled by the growth of the Islamic State group -- which has expanded despite air strikes from a U.S.-led coalition -- and the recent arrival of a wave of refugees on Europe's shores.

Many appear to now regard Assad as the lesser of two evils, in the face of IS atrocities including beheadings, rape and the destruction of antiquities.

But opposition forces point out that Assad's forces still kill far more Syrians than IS, and that his regime's strategy has always been to paint itself as the sole alternative to extremists.

For many in the opposition, the apparent softening of the line on Assad comes as little surprise and is just the latest example of the disarray that characterizes their backers' policy.

"What is amazing is that Russia and Iran are continually providing every form of support for the regime, while the (pro-opposition) Friends of Syria group have become rivals," said Samir Nashar, a member of the Syrian National Coalition opposition body.

"This has created confusion and an inability to form a common front on sensitive issues."

Key rebel backers including the United States, Turkey, Saudi Arabia and Qatar have often disagreed on how best to support the opposition and even competed for influence inside it.

Many opposition forces say they have come to expect little support from their backers, and are disappointed after years of patchy assistance and changing policy priorities.

"As Syrians, we've stopped caring about these statements, which come not as a result of what's happening on the ground, but of political parties pursuing their interests at home," Idlibi said.

"In the beginning, I used to think that the West was a real ally of the Syrian people... but our opinion quickly changed because of their political inconsistency."

On the ground, rebels said they would continue to battle the regime, and try to demonstrate it was no ally in the fight against IS.

"We have no choice but to prepare for larger military action and to apply more pressure to show the weakness of Assad and his allies," said Major Essam al-Rayes, spokesman for the Southern Front rebel group.

"Can a regime that can't even hold onto its border crossings be relied upon?"

"For us, nothing has changed," added Ahrar al-Sham's Qura Ali, saying that the group would continue its "work on the ground".

Others said they saw "no choice" but to oust Assad after a war that has cost more than 240,000 lives, devastated the country, and displaced half its population.

"Those who have suffered hundreds of thousands of deaths and so much destruction cannot take a step back," said Abu Omar.

"Whoever achieves only half a revolution is digging his own grave."

***while Lebanese politicians still waiting like idiots...as to what they should do..

The Resistance will continue to hunt you takfiris down wherever you may be :)

Naharnet sympathizes with Al Nusra and ISIS, it is pretty clear.
After 4 years of bloodshed they still consider these takfiris "moderate democracy rebels"