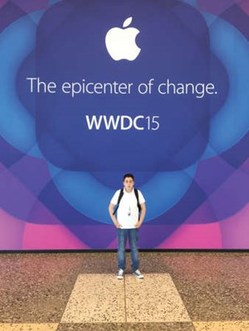 Lebanon's Jake al-Mir was the youngest developer to be awarded Apple's WWDC 2015 scholarship for developing an app on speeding and driving, reported the Kuwaiti daily al-Anba on Thursday.

The only Arab at the event, Jake al-Mir developed the “NoSpeed” app to tackle the problem of speeding and decrease car accidents, especially in Lebanon.

He highlighted the significance of the app in that it functions even when the mobile phone is locked.

It works by sending the driver a notification whenever he exceeds the speed limit, therefore also helping people avoid speeding tickets.

He explained that it took him nine months to develop the app, noting that 3,287 people die everyday from car accidents.

“NoSpeed” is available on the Appstore.

A student at Keserouan's College des Soeurs des Saints Coeurs, al-Mir had previously developed another app, a game, “Emoji Escape”, which is also on the Appstore.

On his future aspirations, al-Mir told al-Anba: “I would like to have my own company, not just aimed at developing apps, but also at manufacturing technological products.”

“I would also like to work for Apple,” he added.

This is the tradition of elitism, intellect and top quality for which our people is known and which is now being presently replaced by warmongering and other low fighting strategies...

well done young man, i wish you a blessed future

Jake al-Mir future could be in Lebanon, if we can build a better Lebanon for our children...I doubt it however with our set of polititians....