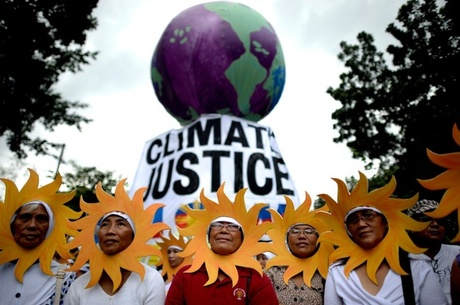 Thousands turned out for climate change marches in Manila and Brisbane Saturday, part of a weekend of action across the globe to demand results from next week's historic Paris summit.

Religious clergy, students and activists marched through the Philippine capital calling for curbs on emissions to mute the impact of climate change, which is blamed for a spike in typhoons and extreme weather that has wreaked havoc on the nation.

The march, attended by more than 2,500 people according to police and expected to build throughout the day, was one of a number of events scheduled in different parts of the country.

The Philippines has been identified as one of the most vulnerable countries to climate change.

"Protect our common home," and "climate justice," were written on the placards held aloft by the surging crowd.

"We want to send a message to the rest of the world, especially the world leaders at the climate talks, to say that our survival is not negotiable," said Denise Fontanilla, spokeswoman for the Asian People's Movement on Debt and Development.

In Australia, where Melbourne on Friday kicked off the weekend rallies, some 5,000 people gathered in the northeastern city of Brisbane for a march led by Aboriginal and Pacific islander representatives and youth groups.

"We are walking together because we know what it's like to protect our country," said Larissa Baldwin, from an indigenous climate youth network.

Pacific islands are particularly at risk from the fallout of climate change, especially rising sea levels.

"These are people that are calling for a just transition to renewable energy," Baldwin told AFP.

Senator Larissa Waters from the Greens party said the turnout, after tens of thousands marched in Melbourne, showed the strength of opposition to plans to develop more of Australia's vast coal deposits.

Organizers in Paris expect hundreds of thousands to take to the streets Saturday in Asian cities as well as Johannesburg and Edinburgh, with similar events set for Sunday in Seoul, Rio de Janeiro, New York and Mexico City.

In Paris, French authorities canceled two rallies following the onslaught by gunmen and suicide bombers which killed 130 people at restaurant terraces, a concert hall and the national stadium on November 13.

Activists now plan to create a two-kilometer (1.2-mile) human chain along the original march route on Sunday. They will break the chain as they pass the Bataclan concert hall, where the worst violence claimed 90 lives, as a mark of respect to the victims.

This week, the U.N.'s weather body said the average global temperature for the year 2015 is set to touch the halfway mark at 1 C.

The Paris conference will gather some 40,000 people, including 10,000 delegates from 195 countries, plus journalists, observers, scientists, exhibitors and visitors.