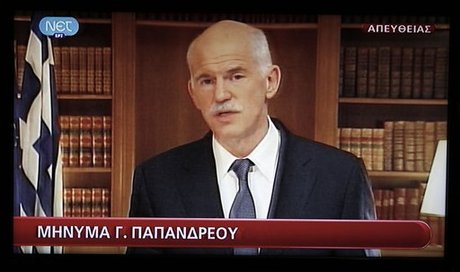 Greece's outgoing Prime Minister George Papandreou said Wednesday that an agreement had been reached with the opposition on the creation of an interim government that will secure the country's new debt deal.

Speaking in a live televised evening address before a meeting with Greece's president, where he was expected to formally resign, Papandreou wished the next prime minister well — but gave no indication of who it would be.

"If we didn't have national consensus with this major crisis, when would we have it? ... We did not have this consensus. Now we do," he said.

His statement came after three days of intense power-sharing negotiations between his Socialists and the opposition conservatives, led by Antonis Samaras.

"Today, despite our political and social differences, we are setting aside the sterile conflicts. A government of political forces is taking over that goes beyond parties and personal biases," Papandreou said. "We will take the necessary steps together with national unity. To secure implementation of (European debt deal) decisions which offer our country security in particularly troubled times."

There has been intense speculation in recent days as to who will take over from Papandreou, but he did not say who it would be.

"It was clear that to achieve this effort we would have to agree on a person who would unite us and would be supported by all of us," he said. "I believe the choice we have made is in line with the institutions and will boost the democratic institutions."