Cruz Says He Would Withdraw U.S. from Paris Climate Accord if Elected 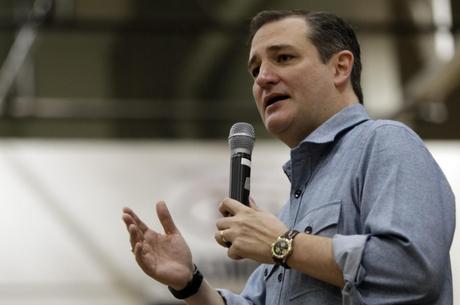 Sen. Ted Cruz, who has questioned the existence of global warming, said Tuesday that if he were elected president, he would withdraw the United States from the landmark climate agreement reached in Paris earlier this month.

"Barack Obama seems to think the SUV parked in your driveway is a bigger threat to national security than radical Islamic terrorists who want to kill us. That’s just nutty," Cruz told reporters in a high school classroom here. "These are ideologues, they don’t focus on the facts, they won’t address the facts, and what they’re interested [in] instead is more and more government power."

Cruz has long sounded a skeptical note on climate change. He chairs the Senate subcommittee that oversees NASA and has said that the space agency needs to focus more on getting off Earth and less time studying what happens on the planet, specifically when it comes to matters of climate change.

The Texas Republican said at a Senate hearing earlier this month that temperatures on the Earth haven't changed in 18 years, sparring with a retired Navy rear admiral and meteorologist who said that the Earth's temperature had risen during that time.

"Those facts are, to use Al Gore’s phrase, an inconvenient truth," Cruz said in Knoxville. He accused the administration and other countries of using climate change as an excuse to increase regulations and make life more expensive.