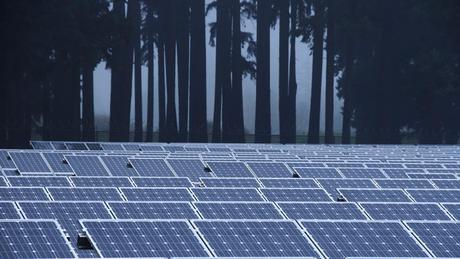 Going green by switching to renewable sources of electricity could be good business for the U.S., according to new research.

A report by researchers at the Lawrence Berkeley National Laboratory in California says that cutting greenhouse gas emissions meant that the U.S. as a whole was $2.2 billion better off in 2013.

And as a result of reductions in other forms of air pollution associated with burning coal, diesel and oil, in accordance with legislation known as state renewable portfolio standards (RPS), the U.S. was perhaps $5.2 billion the richer.

The RPS are state impositions on utility companies, requiring them to generate a proportion of their electricity from sources that do not burn fossil fuels and thus stoke global warming by emitting the greenhouse gas, carbon dioxide.

The requirements differ from state to state, and only 29 U.S. states and Washington DC right now have such standards. Some states are contemplating revising or extending their standards.

Some U.S. researchers have repeatedly argued that wind and solar sources could power the entire U.S. But in a nation in which only 44% of people accept the evidence of climate change, there is no rush to put such arguments to the test.

But the differences such legislation makes are measurable − sometimes with surprising precision. Because fossil fuel-burning power plants use water to turn into steam to drive turbines, and as coolant, the standards save water. In 2013, utilities reduced their withdrawals by 830 billion gallons and cut consumption by 27 billion gallons.

The greatest share of jobs generated by renewable energy industries was in California, which in 2013 invested heavily in photovoltaic generation

The report’s authors call their findings “impacts”, rather than benefits, because what might benefit one part of the economy imposes a cost somewhere else.

And their study is careful to embrace all the uncertainties of calculations that involve not just industrial book-keeping but social economics such as health costs and environmental benefits.

Although the accounting was conducted on a national basis, the report recognises that some states may have experienced more impact than others. The people who felt most keenly the reduction in sulphur dioxide emissions – down by 77,400 tonnes – from coal-fired plant were mostly in the Great Lakes, Northeast, Mid-Atlantic and Texas regions.

The people who benefited most from reductions in water withdrawal were in California and Texas − both states that are vulnerable to drought.

And the greatest share of jobs generated by renewable energy industries was in California, which in 2013 invested heavily in photovoltaic generation.

Altogether, the 29 states produced 98 terawatt-hours in 2013 (98 million megawatt-hours) of “new” renewable energy – that is, from plant built after the RPS standards were made into legislation. One megawatt-hour is roughly equal to the total amount of electrical energy used by about 330 U.S. homes during one hour.

Although the new energy is just 2.4% of nationwide electricity generation, it represents a 3.6% drop in total fossil fuel generation.