Dialogue Session Does Not Tackle Presidency as Next Round Set for Feb. 17 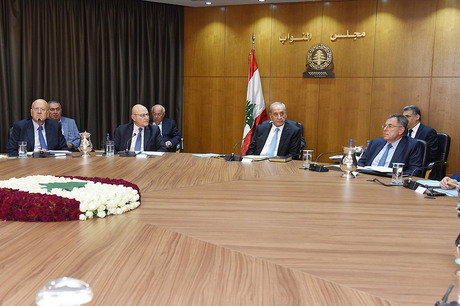 A national dialogue session was held at Speaker Nabih Berri's Ain el-Tineh residence on Wednesday to address the latest developments in the country.

Marada Movement leader MP Suleiman Franjieh revealed after the talks that the gatherers did not address the presidential deadlock.

Asked why by reporters, he replied: “Speaker Berri was the one steering discussions.”

He added that he is still running for the presidency, revealing that “his house is still open” to rival candidate Change and Reform bloc chief MP Michel Aoun.

Aoun was not present at the talks, but Foreign Minister Jebran Bassil represented him at the dialogue.

He left without making a statement.

Meanwhile, Loyalty to the Resistance bloc MP Ali Fayyad told reporters that “an agreement was reached among the gatherers” on the contentious military appointments file.

Education Minister Elias Bou Saab later told al-Jadeed television that the Change and Reform bloc ministers will attend Thursday's cabinet session in wake of the agreement that was reached on the appointments.

The next session of the dialogue was set for February 17.

The dispute over the appointments file and the government's decision-making mechanism are two issues that had caused the Change and Reform bloc to boycott cabinet sessions.

The government is scheduled to meet on Thursday.

Salam and Berrie have one agreement for mantain the status quo...being the two principal figurtes of a state of Lebanon!! the Cristhians...