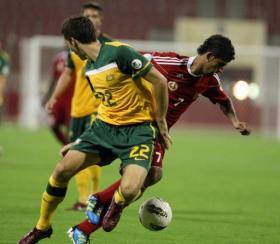 China's loss against Iraq left Juan Antonio Camacho's men all but out of the running for Brazil 2014, needing a hatful of goals in their final two matches and for other results to go their way.

Younis Mahmoud's injury-time strike gave Iraq a 1-0 victory in Doha late on Friday and effectively extended China's wait for a second appearance on football's biggest stage after their winless showing in 2002.

"China played bravely, but we won the match and the result has almost guaranteed our place in the last 10," said Iraq's coach, Brazilian legend Zico.

"The game went as we predicted. We knew China would attack, so we focused on defending in the first half before sealing victory late on."

The result raised questions over the future of Camacho, the former Real Madrid coach who arrived in August with a remit to steer the potential Asian giants through qualifying.

"After its elimination, the national team will have nothing important to do for two years, until the qualifying phase for the 2014 Asian Cup," said the Oriental Morning Post in a commentary.

"Jose Antonio Camacho won't have any opportunities to prove himself. For the Chinese federation and Chinese football, what is the point of employing such a well-paid coach?"

Regional champions Japan romped into the fourth and final qualifying stage with a 4-0 win over Tajikistan, and Uzbekistan also went through in Group C after beating North Korea 1-0.

For the North Koreans, the result destroyed their dream of reaching consecutive World Cups after their showing at South Africa 2010, which ended a 44-year absence from the tournament.

Jordan went through as the only team still on maximum points as they downed Singapore to make it four wins out of four in Group A.

But Australia's perfect record was tarnished by a shock 1-0 loss against minnows Oman, which came despite the presence of star men Harry Kewell, Mark Schwarzer and Brett Emerton.

"I realized what went wrong and we're going to work on that and the two trainings (sessions) will be sufficient for that," Australia coach Holger Osieck told journalists.

"I will analyze it together with the team, but we didn't show the cohesion... that we normally have and that was one of the reasons why we didn't play our game."

Saudi Arabia beat Thailand 3-0 to lie second behind Australia but just a point ahead of the Thais and Oman, with all to play for in their last two games.

South Korea have one foot in the next round after a 2-0 away win over the UAE which left coach Cho Kwang-Rae confident of taking the final step in Beirut on Tuesday.

"We are ready to extend this winning momentum to the next match against Lebanon," Cho told journalists in Dubai.

But Lebanon will fight tooth and nail to retain second spot in Group B after going two points clear of Kuwait with a 1-0 win in Kuwait City.

Group E leaders Iran were frustrated by a 1-1 draw with Bahrain, against whom they smashed six last time around, and Qatar dumped out Indonesia 4-0.

Singapore, the UAE and Tajikistan are also eliminated as the bottom teams in their respective groups with no chance of reaching the top two spots in their last two games.

Ten teams will reach the round-robin fourth stage, where four tickets to Brazil 2014 are up for grabs along with a place in an intercontinental play-off.

The third round's final two sets of games will be played on Tuesday and February 29.