Geagea Says Hizbullah Does Not Want Aoun as President 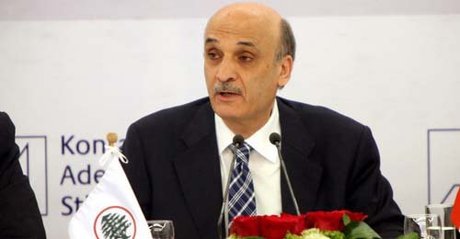 “At the strategic level, Hizbullah cannot coexist with a real state in Lebanon … and at the tactical level Hizbullah does not want General Aoun as president, although it cannot afford to lose him, which has pushed it to obstruct the presidential vote,” Geagea said in an interview with Russia Today TV.

“This way it does not lose Aoun and it postpones the problem,” Geagea added.

On Monday, Hizbullah chief Sayyed Hassan Nasrallah accused the LF of seeking to stir a dispute between Hizbullah and the FPM.

“If we head to parliament, it is known that =Aoun will not be elected,” Nasrallah noted, dismissing LF calls in this regard.

“Our relation with (Speaker Nabih) Berri is not based on coercion and we are ethically committed to supporting Aoun's nomination,” Nasrallah added.

Lebanon has been without a president since the term of Michel Suleiman ended in May 2014 and the FPM, Hizbullah and some of their allies have been boycotting the electoral sessions.

Al-Mustaqbal movement leader ex-PM Saad Hariri launched late in 2015 a proposal to nominate Marada Movement chief MP Suleiman Franjieh for the presidency but his suggestion was rejected by the country's main Christian parties as well as Hizbullah.

In January, Geagea announced his support for Aoun's presidential bid after the LF and the FPM signed a rapprochement agreement described as a “declaration of intent.”

Hizbullah and the FPM, as well as March 14's Lebanese Forces, have argued that Aoun is more eligible than Franjieh to become president given the size of his parliamentary bloc and his bigger influence in the Christian community.

DNA explains everyday the misinformation and disinformation distributed by the media of the "Moumana3a" and lying on its own people to make them less capable of thinking.

To make things very clear: imbassil was the initial agent-traitor prior to the return of the Caporal from his exile in France. He was and still is the No1 link between 3ammo and Ebola. Now you can see better why the formation of all governments were blocked until "little Hitler" was appointed minister.
Money was flowing for both and for the many...

Geagea Says Hizbullah Does Not Want Aoun as President

-- Lol I've been saying that on this forum for almost two years, while all the Hezbo buffoons (Mystic, Roar, among others) called me delusional. Nonetheless, Geagea said it correctly. Hezbollah cannot coexist with a real state, which Aoun would try to create if he became president. Aoun would build up the army, which would be a threat to Hezbollah's sovereignty (insert Mystic retort: "the LAF and the resistance are one").

Berri is the problem from the beginning, he is not doing his job. Dissolve he parlement if all members are not responding to his repeated sessions to elect a head of state. Christians need to walk in the streets day in and day out to revolt against the lie of Berri calling these sessions with lack of attendance. Simply elect the president with those doing their jobs and coming to the parlement. Very simple.

you misread what this idiot meant

You mean that his moment was aimed at Hariri & co? Could be. But I suspect that there is subtle message to HA in what he said. I know for a fact that many in the Aoun camp are becoming frustrated with HA's maneuvering.