Geagea Says LF, FPM Not Trying to 'Eliminate Everyone' in Municipal Polls 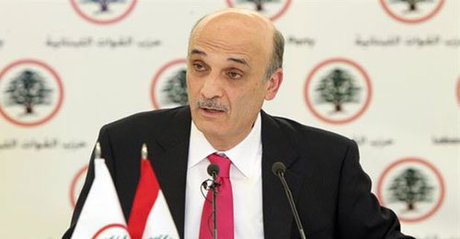 Lebanese Forces leader Samir Geagea stressed Sunday that the newly-forged alliance between the LF and the Free Patriotic Movement is not trying to “eliminate everyone” as some parties and media reports have claimed.

“It is not true that political parties, especially the LF and the FPM, are trying to eliminate families in the elections,” said Geagea at a press conference he held shortly after polls closed in Mount Lebanon's municipal elections.

“We are allied with local forces in the municipal polls, not only with parties, and this is what was reflected in Zahle through our support for Asaad Zoghaib, in Shiyyah with Edmond Gharios, in Jdeideh, and in Sin el-Fil with Joseph Chaoul,” he said.

He underlined that the LF and the FPM “have never claimed” that they “represent 86% of Christians.”

“After we allied with the FPM, surveys showed that 86% of Christians supported the rapprochement,” he explained.

Turning to the elections in the Chouf town of Deir al-Qamar, where the two parties allied against a list backed by National Liberal Party chief MP Dory Chamoun, Geagea denied that the the LF and the FPM were trying to eliminate the entrenched influence of the Chamoun family in the town.

“We share 99% of the political vision with Dory Chamoun and he did not agree with (LF deputy chief MP) George Adwan over Deir al-Qamar's polls due to local circumstances. If the list backed by Dory Chamoun wins, I will be the first one to congratulate him... No one can eliminate Dory Chamoun or the Chamoun family,” Geagea emphasized.

As for the heated Jounieh electoral battle, the LF leader asserted that it was “not a battle between the LF and the FPM at all.”

“In Jounieh, the electoral battle is between local forces and some of them are close to the FPM while others are close to the LF, so we agreed to let the local conflict take its course. Some tried to invoke the presidential issue and (FPM founder) General (Michel) Aoun's name, but the issue of Aoun's (presidential) nomination cannot be affected by Jounieh's municipality or any other thing,” Geagea said.

The FPM had backed a list headed by Juan Hbeish and comprising candidates from the Kataeb Party, al-Waad Party and the National Liberal Party in Jounieh's elections while the LF backed a list headed by Fouad al-Bouwari and including candidates supported by Maronite Foundation in the World and former MPs Farid Haykal al-Khazen and Mansour Ghanem al-Bon.

“The municipal vote has proved that there is a State in Lebanon. What is absent is the political will, which is being paralyzed by some parties due to personal interests,” Geagea said in his press conference.

“Politics and development cannot be separated in the elections. Real development take place at the level of the government,” he noted.