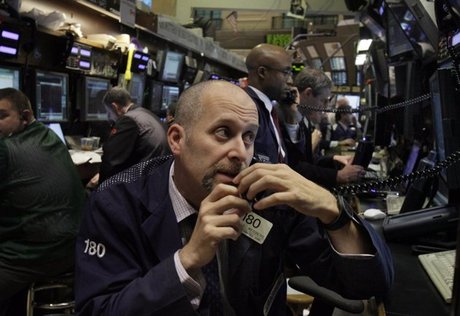 The collapse of talks aimed at reducing the staggering U.S. budget deficit weighed on world markets Tuesday but failed to stifle a rebound in Europe.

Stocks took a pummeling on Monday after a so-called supercommittee in Congress failed to reach a deal to cut the U.S. federal budget deficit by $1.2 trillion over 10 years. While not entirely unexpected, the failure heightened worries that political bickering — in the U.S. and Europe — will hurt efforts to cut debt during a period of declining economic growth.

European countries are locked in a debate over how to provide a lasting solution to their debt crisis, which is causing borrowing rates to rise to dangerous highs for ever-larger countries.

Many countries would like the European Central Bank to step up its bond purchases, which have the effect of keeping down borrowing rates. It currently buys bonds in limited amounts, but experts say it needs to expand the program significantly if it is to be effective.

Germany, however, opposes such a move for fear it would create inflation and saddle the central bank with bad loans.

Berlin is also against issuing eurobonds — debt backed by all 17 eurozone nations — that the European Commission is pushing for this week. Chancellor Angela Merkel is worried it would expose German taxpayers to irresponsible spending in other countries and erode pressure on governments to reform their economies.

As the leaders struggle to find common ground, the markets remained on edge.

Spain was forced to pay sharply higher interest rates in an auction of short-term debt, suggesting investor remain wary of the country's financial prospects despite a new, center-right government coming to power this week.

Clouds are gathering in Asia, where Singapore — seen as a bellwether of Western demand because of its very high reliance on trade — said Monday its economy would likely suffer a sharp slowdown in 2012 as export orders from developed countries wane.

"I think we are looking at maybe 2 percent growth for the entire world. For a normal year, global economic growth will be like 4 percent, but now it has to revise down to about 2 percent, so you are taking out a big chunk of the GDP ... around the world," said Francis Lun, managing director of Lyncean Holdings in Hong Kong.

Losses among Asian stocks were broad-based and included banks and consumer shares.

Benchmark crude for January delivery was up 93 cents at $97.85 a barrel in electronic trading on the New York Mercantile Exchange. The contract fell 75 cents to settle at $96.92 in New York on Monday.