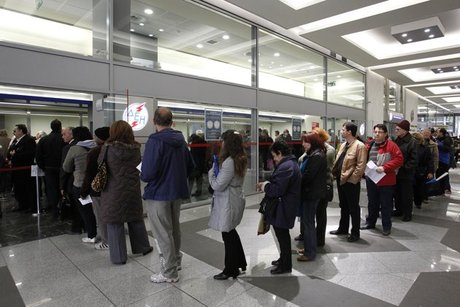 Greece's largest trade union called Tuesday for a 24-hour strike next week to protest austerity measures, which would be the first major walkout since the appointment of an interim coalition government earlier this month.

The GSEE union, which represents mainly private sector workers, said it was aiming for a general strike on Dec. 1, but was waiting for a decision later Tuesday by the country's civil servants' union as to whether they would join. Greece's last general strike, held in October, saw services across the country shut down for two days.

Greeks have held dozens of strikes and demonstrations over the past two years as their country has been gripped by a severe financial crisis that saw the government impose repeated rounds of salary cuts and tax hikes and left the country reliant on international rescue loans.

Workers at the capital's subway, tram and electric rail network held a four-hour work stoppage Tuesday to protest measures that include the suspension on partial pay of about 30,000 civil servants. Separately, members of the electricity company's workers' union demonstrated outside the company's bill-issuing building in continued protests over a new property tax that has been added to consumers' power bills.

Greece's new government, appointed earlier this month after political turmoil led to the resignation of the Socialist prime minister and his replacement with a non-politician, is negotiating the details of a second bailout, worth euro130 billion ($175 billion). It includes provisions for banks and other private holders of Greek bonds to write off 50 percent of their Greek debt holdings — potentially cutting the country's debt by euro100 billion.

The debt-ridden country is also desperately in need of a vital euro8 billion installment from its initial bailout agreed on in May 2010, without which Greece will go bankrupt before Christmas and be unable to pay salaries and pensions.

European leaders have insisted they receive written commitments from the government and heads of the main parties in the coalition — the majority socialists and the conservatives — before they agree to release the funds. Conservative party leader Antonis Samaras has insisted his support for the interim government and the new debt deal should be enough.