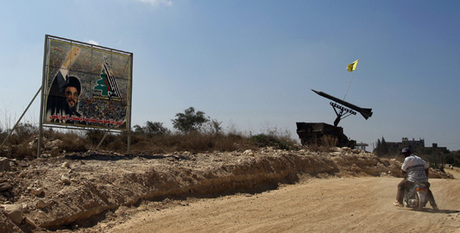 The military advisor to Iranian Supreme leader Ali Khamenei has warned Israel against attacks on Iran's nuclear sites saying Hizbullah would retaliate with its Katyusha rockets.

Maj. Gen. Yahya Rahim Safavi told Iran's Arabic-language satellite channel al-Alam that in case of an attack by Israel, Hizbullah in Lebanon and Hamas in the Gaza Strip will join the fighting.

"There will be no need for Iran to launch ballistic missiles at Israel, because all the Zionist cities are within the range of our ally Hizbullah's Katyushas,” Safavi, who is the former chief of Iran’s Revolutionary Guard Corps, said.

"We have obtained extensive intelligence on all the Zionist regime's military maneuvers, including the joint exercises with NATO in the Mediterranean Sea and the joint drill with Italy, which focused on long flights," he said.

He added that the Iranian military forces are considering the worst scenarios.

There is growing concern about Tehran's alleged quest for a nuclear weapon and feverish speculation that Israel might be considering a preemptive strike on its atomic sites.

Hmmmmm........... What do they call it when a citizen or group of citizens follow instructions from intelligence services of a foreign country? Oh yeah, it's called TREASON!!!!

And when the agents of a foreign country are guilty of acts of murder against fellow citizens, then the punishment should be castration before death.

If the Group or Party that is taking instructions from a foreign country, commits acts of murder and terrorism against fellow citizens, not only should the perpetrators face stiff justice, but the entire leadership of this Group should face long prison sentences and in some cases the death penalty if they enabled these terrorist acts.

Hezbollah is alleged to have been involved in the murders of Rafik Hariri, a former Prime Minister. No way this could happen without orders coming from Iran. Hezbollah is subordinate to the Iranian Quds Force. If proven guilty, the entire leadership team of Hezbollah must be held accountable for murder and treason.

Strange, thought Iran was going to break Israel's neck directly if attacked? What about those long range so well developed missiles they've been advertising for lately?
Watch it, the 5th fleet is not too far too. Israel has also the right to ask help from its big brother, fair no?

The Cowardly Iranian 7th century regime has always sought sub-contracting their fights to their expendable zombies the likes of HezbEbola and Hamas, in hope to buy themselves some time and get the free world embroiled in hundreds of meaningless protracted fights with their rag tag street gangs, they are in for a "Biggie" this time around. There needs to be a number of very effective massive assaults on the Iranian regime taking out all their Nuclear weapons centrifuges and all other vital military infrastructure around the country. It should be a major Blitz from all and every side. A Shock and Awe strike that will cripple the regime and help the Iranian people and many others bring down this filthy regime and to have it face justice for all its crimes against the Iranian people, the Middle East, and the entire world. From the top of my head I can think of hundreds of locations that an all out assault can be initiated from all around Iran. All the Best....!!

The Iranian regime's empty useless worn out rhetoric should be faced with the latest and most tactful military action. No technology should be spared or ruled out in this one...

Hey people!! How should we feel we the Lebanese when a foreign decision means life or death to us?? Why should we let these jerk screw our lives?
When will we have the balls to stand up and start our own SPRING against all these thugs that have no loyalty to Lebanon???

those pro hezbi will still dare say that hezbollah is a lebanese party only worried about lebanon? iran confirms that hezb is their dog at the order of their master... let us laugh at their hypocrisy....