Jumblat to Geagea on Aoun's Nomination: 'Talk to Berri First' 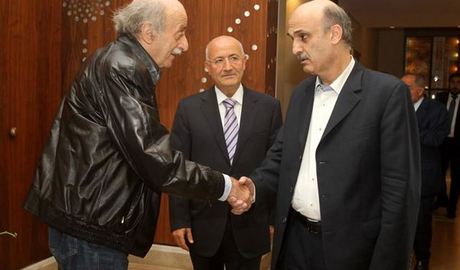 Progressive Socialist Party leader MP Walid Jumblat told Lebanese Forces chief Samir Geagea during their latest meeting that he has to “talk” to Speaker Nabih Berri before anyone else if he is seeking to secure the election of his new ally MP Michel Aoun as president, a media report said on Friday.

“The solution is not in my hand and you have to talk to Hizbullah, (ex-PM Saad) Hariri and Speaker (Nabih) Berri,” al-Hayat newspaper quoted Berri as saying.

“Jumblat then stressed to Geagea that he has to talk to Speaker Berri first,” the speaker added, according to al-Hayat.

No need to go and beg Monsieur du Barry for promoting another corrupt, liar, traitor and mentally ill guy....

The main problem with Lebanon's warlord leadership, the result of Article 24 of the Constitution keeping the Shia majority from forming the government, is that none of these six or so warlords are warlike.