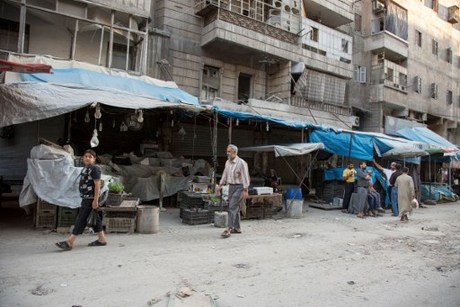 Opposition-controlled parts of Syria's battered northern city Aleppo came under total siege on Sunday, after government forces severed the last route out of the east.

An estimated 300,000 civilians live in rebel-held neighborhoods of Syria's second city, the U.N. says, and there are fears that they could face starvation.

The rebels have failed to thwart a major Russian-backed army offensive around Aleppo, which has been devastated by Syria's five-year conflict.

On Sunday, regime fighters descended on the Castello Road and fully cut it, said Rami Abdel Rahman, head of the Britain-based Syrian Observatory for Human Rights.

"The eastern neighborhoods are now completely besieged," he told AFP.

The Observatory also reported that five civilians were killed Sunday in regime air strikes on the rebel-held neighborhood of al-Maysar while 16 rebel fighters died in the regime advance on Aleppo.

The Castello Road had been used by rebels but also by shopkeepers bringing in produce for residents and by villagers visiting relatives in the city.

He said the army had reached the road and was setting up sandbag barriers.

Facebook pages run by Aleppo-based activists urged civilians to stay away from the route to avoid being arrested or wounded.

Sieges by both the regime and its opponents have had a devastating impact on other areas of Syria, including the town of Madaya where aid groups say dozens of people have died from starvation and malnutrition.

The United Nations says that nearly 600,000 people are living under siege in Syria, most of them surrounded by government forces.

Eastern Aleppo has not been designated by the U.N. as besieged, but residents complain of food shortages and shopkeepers have begun rationing their products.

A leading opposition group warned last week that hundreds of thousands of civilians in the city were at risk if the Castello Road was cut.

Anas al-Abdeh, head of the Istanbul-based opposition National Coalition, said his group feared "that if the Castello route is totally cut off, more than 300,000 civilians will starve."

Fighters loyal to President Bashar Assad have tried over the past two years to cut the strategic road as part of a campaign to retake all of Aleppo.

Syria's state media made no mention of the developments on Sunday, but pro-government websites such as Al Masdar News reported the advance.

AFP's correspondent in one rebel-controlled neighborhood said at least six air strikes targeted the eastern opposition neighborhoods after the route was severed.

On Saturday, at least 28 civilians including children were killed in bombardment of the eastern districts, said the Observatory, which relies on a network of sources on the ground.

Another four people died in rebel rocket fire on the western government-controlled neighborhoods, it said.

Aleppo was once Syria's commercial powerhouse but has been ravaged by fighting since mid-2012, with several temporary truces failing to end the violence there.

On Friday, U.S. Secretary of State John Kerry and his Russian counterpart Sergei Lavrov said they had agreed on "concrete steps" to salvage the failing nationwide ceasefire but would not give details.

Russia has demanded that non-jihadist rebel groups -- particularly those in and around Aleppo -- disassociate themselves from al-Qaida affiliate al-Nusra Front in order to avoid being targeted in air raids.

More than 280,000 people have been killed and millions have been forced to flee their homes since Syria's conflict erupted in March 2011.

U.N. Syria envoy Staffan de Mistura has urged Russia and the United States to push for a resumption of peace talks next month.

The Butcher wants Aleppo as part of Alawistan.

Let's see how long will this siege last,as with most previous sieges by government forces not that long before their are back from where they started

The Butcher will empty Aleppo from sunnites...
It is almost the case...

But what will happen to you when the Butcher will become an ally to the Jewish state???

If Ebola rejects the killing of Palestinians by Israel, how come they accept the killing of Syrians by the Butcher???? Unless the plan is on "long term"!!!