Penned in on All Sides, Syria Kurds in Economic Dire Straits 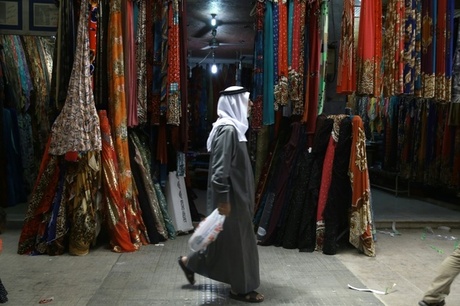 Syria's Kurds dreamt of an economic success story when they declared an autonomous region in the country's north, an area rich in oil resources and known as a breadbasket.

But instead their proto-state has become an island, squeezed economically on all sides and dependent on aid to make up for shortfalls in basic goods including food and medicine.

In his pharmacy in Qamishli, Mustafa Ebdi examined his dwindling stock.

"Most medication is missing," he told Agence France Presse, as a crowd of customers picked desperately through his sparse shelves.

"Our pharmacies are empty. We cannot find general anaesthetics or other medication used in surgery, as well as medication for diabetes," he added.

Location is largely to blame.

"The economic situation is bad because the Kurdish areas are surrounded -- to the south there is the Islamic State group, to the north Turkey," said analyst Fabrice Balanche.

To the east lies the fickle Simalka border crossing with the Kurdistan region of Iraq, whose leaders "close the border whenever (they) want", Balanche added.

Despite sharing a nominally common cause, Iraqi Kurdistan has tense relations with the ruling Democratic Union Party (PYD) in Syria's Kurdish regions.

It has close ties with Turkey, which considers the PYD to be the Syrian branch of Turkey's Kurdistan Workers' Party (PKK), designated a "terrorist" group by Ankara.

As a result, the sole official trade route in or out for the northeastern portion of the autonomous Kurdish region is frequently closed, often without warning.

- Spiralling prices -And the result for residents of the area is shortages and economic hardship.

Strolling through the shopping market in Qamishli, Mohannad al-Jarba complained that with so few goods, shopkeepers can hike up prices as and when they please.

"We're beholden to the seller's conscience because he controls the prices," he said.

Syria's conflict erupted in March 2011 with anti-government protests across the country, but has since evolved into a complex war for competing zones of control.

Syria's Kurds largely declined to side with either regime or rebels, focusing instead on building a semi-autonomous region in Kurdish-majority areas.

More recently, the PYD's armed wing has become a key force against IS, fighting the jihadist group with support from the U.S.-led coalition.

On the face of it, the Kurdish region has the resources to thrive, including oil fields from which the Kurds have extracted and refined sufficient crude for their own consumption and electricity generation.

The self-proclaimed Rojava region also includes large stretches of fertile land, particularly in northeast Hasakeh province, and was once the primary producer of wheat for consumption across Syria.

But production has plummeted because of falling soil nutrient levels and IS control over the key trade access routes in the adjacent provinces of Raqa and Deir Ezzor.

- Aid not a solution -But residents and Kurdish officials alike lay the lion's share of the blame for their economic woes on the closure of the Simalka crossing in mid-March.

They accuse Iraqi Kurdish authorities of shutting the post in response to the declaration of a federal zone in northern Syria on March 17, a development which provoked Turkish anger.

The self-proclaimed "federal system" is intended to centralise governance in the three Kurdish cantons of Afrin, Kobane, and Jazire in north and northeast Syria.

Standing at his post under the beating sun at the border point, Siyamand Usman said the amount of goods entering Kurdish areas in Syria has plunged by 90 percent since March.

"We were surprised when the Simalka border crossing was closed at the same time as the announcement of the federal region," he told AFP.

"The only products that enter stay under the sun for several days and huge fees must be paid to make sure they come in."

In early July, the United Nations began airlifting humanitarian aid from Damascus into Qamishli to support nearly 300,000 people in need.

The first delivery carried 40 tonnes of food including rice, salt, and sugar, but Kurdish officials say the assistance from aid groups is only a temporary stopgap.

"We're suffering shortages of fruits and vegetables, and we're unable to export or import," said Badran Jiya Kurd, advisor to the autonomous administration.

"The Syrian regime never created the opportunities for economic advancement in the region, even though our area is rich. It was taking advantage of our resources," he said.