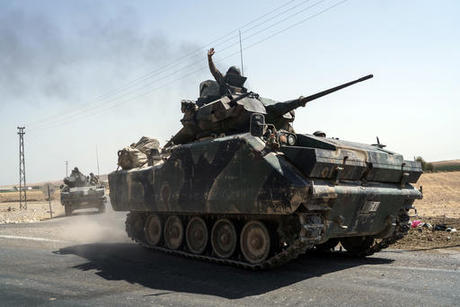 Turkey's week-old cross-border offensive in Syria could become a drawn-out affair that stokes tensions with Washington if Ankara continues to take the fight to U.S.-backed Kurdish fighters, analysts say.

Turkey says its unprecedented operation aims to rid the border of both the Islamic State group and the anti-IS Kurdish YPG militia, which Ankara considers a terrorist group.

But since sending in tanks to help Syrian Arab rebels rout IS from the border town of Jarabulus last week, Turkey’s fight has been mainly with forces affiliated to the YPG.

Turkey’s deputy prime minister Numan Kurtulmus said the army aimed to prevent the creation of a Kurdish-controlled corridor running nearly the entire length of the border, which would bolster Kurdish PKK rebels on the other side of the frontier.

But carving out and defending a buffer zone between Kurdish-controlled areas in northeast and northwest Syria could trap Turkey across the border, said Aykan Erdemir, a senior fellow at the Washington-based Foundation for Defense of Democracies.

"Ultimately, Syria could yet turn into a territorial extension of the protracted fighting between Turkey and the PKK going on since 1984," he warned.

On Monday, Turkey said it would continue targeting the Kurdish-dominated Syrian Democratic Forces (SDF) until they retreated east across the Euphrates River.

The army said it had already cleared 400 square kilometers (150 square miles) of "terrorist elements" but the government hinted it could push further south, towards the city of Manbij which the SDF wrested from IS earlier this month.

Such a move, which would take Turkish forces over 30 kilometers (20 miles) inside Syria, would be risky, said Aaron Stein of the Atlantic Council's Rafik Hariri Center for the Middle East.

Turkey suffered its first casualties last weekend, when a soldier was killed and three others injured by an anti-tank missile.

A day later Turkey said it had killed 25 "terrorists."

"Everything they've done so far has been easy and they've already taken a loss," Stein said.

"If they (Turkey) want to fight through (into Manbij) they’ll take more casualties," he said calling the M60 tanks deployed by Turkey "museum pieces" that are vulnerable to roadside bombs.

So far Turkey has kept the operation relatively small, deploying only a few dozen tanks and hundreds of troops alongside a larger force of Syrian rebels.

But as it gains ground it could be forced to step up its presence, to help the rebels hold on to their gains.

"What Turkey does not want is for that territory to fall back into the hands of the Islamic State or the Syrian Kurds," Sinan Ulgen, a former Turkish diplomat who chairs the EDAM think tank in Istanbul, said.

Ulgen said he expected the Turkish army to set up a beachhead around Jarabulus, advancing and retreating from there for surgical strikes.

But further clashes with the YPG would add to tensions with NATO ally Washington, which loudly protested the weekend clashes after having backed Turkey's operation at the outset.

Calling the violence "unacceptable", the Pentagon assured the Kurdish forces had "largely" fulfilled their promise to retreat east of the Euphrates.

"It is hard to see how this does not get messy," the European Council on Foreign Relations (ECFR) wrote in a paper.

"For the Kurds the entire conflict has been about establishing a quasi-state of their own within Syria; for Turkey it is now about preventing such an outcome."

Turkey's foray has also raised questions about its stance in Syria's core war, between Russian-backed Syrian President Bashar Assad's regime and the rebels trying to oust him.

Turkey has been a fierce opponent of Assad but recently appeared to soften its stance.

Both Russia and Damascus, meanwhile, registered only muted protest when Turkish tanks crossed onto Syrian soil.

But the Turkish offensive could spur on rebels fighting Assad's forces, including in the battered city of Aleppo.

"In the end, it is hard to imagine that the different actors can simultaneously remain in alignment on the Kurdish question while maintaining a brutal fight elsewhere. Something will have to give," the ECFR said in its paper.

Within Turkey's borders, the operation could also lead to an escalation in the fighting between the military and the outlawed PKK.

The PKK have killed hundreds of Turkish security force members since a truce fell apart last year. A PKK offshoot has claimed three suicide bombings in Istanbul and Ankara over the same period that killed scores of people.

"If there is a more sustained confrontation with the YPG that will certainly have a negative impact... in relation to the ongoing struggle against the PKK," Ulgen said.

they're going to get a taste of their own medecine, it's only a matter of time before those takfiri extremists they funded, armed and trained to slaughter and loot in syria turn against them.