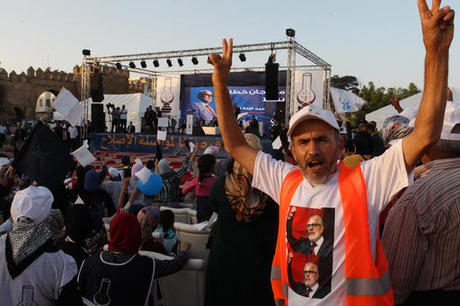 The vote pitted the ruling Islamist Justice and Development Party (PJD) against the liberal opposition Authenticity and Modernity Party (PAM), which says it wants to roll back the "Islamization" of Moroccan society.

But whatever the result, the real power will remain in the hands of King Mohammed VI, the scion of a monarchy that has ruled the North African country for 350 years.

Early turnout was low at polling stations in the capital, with many people waiting until after the main weekly Muslim prayers at midday to go and cast their vote.

"I came to carry out my duty as a citizen. Our Morocco needs a healthy democracy," said Meriem, a woman in her 40s, after voting at a polling station set up inside King Hassan II high school in central Rabat.

"It's good for our country. People must participate," said Mohammed, a retiree who turned up smartly dressed.

To make life easier for the illiterate, who make up a third of Morocco's population, the 30 parties in contention were marked on ballot papers with symbols such as a tractor or camel.

For daily newspaper L'Economiste, the vote represents "the first big democratic test of post-Arab Spring" Morocco, while the Arabic-language daily Akhbar Al-Yaoum saw it as "The Friday of the verdict."

The interior ministry, in an early account of the vote with only 10 percent of the electorate having cast their ballots, said the election was being held without incident.

Polls were due to close at 1800 GMT with first results expected on Friday evening.

Prime Minister Abdelilah Benkirane, casting his ballot in Rabat, told reporters that his PJD had run "a successful campaign" and expected to fend off its rivals.

The PJD came to power in 2011, months after massive street protests prompted concessions from the monarchy. His party has headed a coalition including communists, liberals and conservatives.

A new constitution transferred some of the king's powers to parliament, at a time when autocratic regimes were falling in Tunisia, Egypt and Libya.

While in government, the PJD passed a controversial reform of the retirement system and followed a relatively liberal economic policy.

Its task has been complicated by the unstable world economy and a drought this year that has hit Morocco's vital agricultural sector and sent growth plummeting.

It has been weakened by rising unemployment and what critics say is a failure to make good on promises in 2011 to tackle corruption.

The party has also faced a string of scandals within its ranks including a drugs bust, a land-grab deal and the suspension of two vice presidents found in a "sexual position" on a beach.

The opposition PAM, formed in 2008 by a close adviser to the king, hopes to take advantage at the polls.

Headed by Ilyas El Omari, it has poured enormous resources into a campaign criticizing the government's economic record as "catastrophic" and pledging to roll back the "Islamization" of society.

The PAM, which wants to legalize cannabis, aims to bring more women into parliament, where they hold just 67 out of 395 seats.

Several parties have fielded ultra-conservative Salafists, in a sign that Islamists are becoming a feature of Moroccan politics.

Around 16 million Moroccans were eligible to vote. Turnout will be a key factor, after it reached only 45 percent in the November 2011 polls.

A list system and an electoral threshold that has been halved from six to three percent could hand small parties a key role in forming the next government.

The PJD and the PAM have ruled out joining forces in a grand coalition.

Under the 2011 constitution, the king appoints a prime minister from the biggest party in parliament once the election results have been announced.

He remains the decision-maker on long-term and strategic issues including foreign policy and major infrastructure projects, said Riccardo Fabiani, a North Africa analyst.