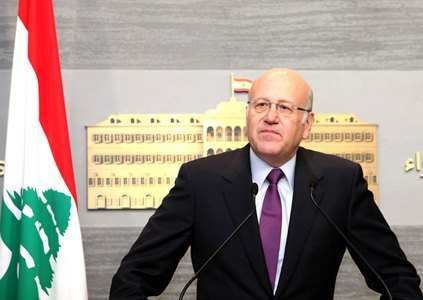 While Miqati did not elaborate on the funding mechanism, a government official said the $32 million sent to the Netherlands-based STL were drawn from the prime minister's office's budget and as such did not need cabinet approval.

"This was a decision taken by the premier after consultations with the president," the official, who requested anonymity, told Agence France Presse.

He said the funds were taken from the High Relief Commission, which is under the auspices of the prime minister's office.

For its part, MTV reported that “Miqati sought the help of the central bank governor (Riad Salameh), who quickly provided a loan to the High Relief Commission, which in turn dispensed it to Miqati in order to fund the STL.”

“My insistence on funding the STL emanates from my keenness on protecting Lebanon, the people, the army and the resistance,” Miqati said from the Grand Serail.

“I transferred Lebanon’s share from the STL funding this morning,” he stressed, saying that he believes in achieving the truth and justice in ex-Premier Rafik Hariri’s Feb. 2005 assassination.

The payment of Lebanon’s share also came out of his commitment to Lebanon’s international obligations and his keenness to preserve the country’s stability, he said.

“The funding is not a victory for one team over the other,” Miqati said.

Miqati dubbed his move as a “national decision aimed at safeguarding Lebanon” and steering it clear of “tough experiences.”

He was referring to Western warnings that the U.N. could impose sanctions on Lebanon if it fails to fund the STL.

Ministerial sources later told LBC on Wednesday that Miqati funded the tribunal through the premiership funds.

They explained that the prime minister took it upon himself to fund it after the deadline for the funding had ended.

They stressed that his action was coordinated by all sides, both directly and indirectly.

He hoped that Miqati would be honest with the public and explain how he invested those funds.

The prime minister also called for the speedy resumption of the National Dialogue at Baabda palace to find common ground among the Lebanese and “build bridges of mutual trust.”

He urged the cabinet ministers “to consider today a new start for the government work” and consolidate the performance of their ministries.

Miqati’s announcement came shortly after postponing a cabinet session aimed at discussing the funding of the STL, which is set to try Hariri’s suspected assassins.

Last week, the prime minister threatened to resign if the cabinet failed to approve the payment of 49 percent of Lebanon’s shares to the STL, around $33 million.

Mr.Mikati,
I'm astonished, congratulations!! You have proved, by funding the tribunal, that you are a great man.

You are proving to be a man of your word earning the respect of both the sunni community and the general public. Your role as a centralist is also very much apprecaited in this polarized country. good job

you have surprised me in the good way...some may think they are the above the law but their turn will come.

Well, I hope we can say Welcome back.

Good for him. Aoun and M8 kept pushing him and he pushed back. Now, i hope they don't take him out...if they got to R Harriri, they can get to anybody! I pray for Miqati's safety and the safety of Lebanon.

Ya Mikati be a man and tell us how it was done? why the secrecy? oh your masters told you so...

@ patriot No worries now the STL God willing by 2013 we can say People army minus the resistence, by then they Hassoun will be in Iran with Bashar having tea with kamanei going back & saying what happened to us :)
Congrats to all the Lebanese people, this was a victory for all true Lebanese.

@allouchi - this is not your concern to know, you guys do not appreciate anything. Just full of hatred and that's terrible. @geha - whatever dude

@sergi
Surely that's not enough...
He has to deploy some efforts to collaborate with the tribunal now, and bring to justice the 4 thugs!
I wonder how Aoun and the Hezb will react to this unilateral decision of Mikati!?
They should resign!

Hopefully that is the first nail in hizballah coffin

Syria & iran are being dealt with...soon their only protector will be a renegade general .

Hope the Lebanese Shiaa like their brothers in Iran (remeber the green revolution) will wake up and see the truth.

some comments here already reflect what was intended by all this mascarade :)
they want us to soncider miqati as a hero by succeeding to fund the STL ... funny!

It was simply an obligation which he fulfilled as PM. Aoun and HA looked the other way knowing that is the only way to go OR we will be isolated from the rest of the world!

Information Minister Walid al-Daouq confirmed to MTV that the funding took place from the premiership budget.----pleasing your sheeps ?

where is hasoon??? said the muqawame?!?! everyone should learn their true size.. especially after seeing the movement of the masses in Syria. remember when hassoon said that Syria is fine in his last interview!??! what happened today is an indication of what follows.. Syria is anything but fine lol.