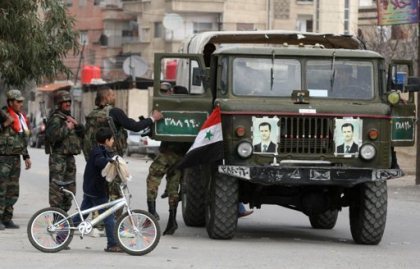 Syria's army and key ally Russia on Thursday announced a nationwide ceasefire to take effect at midnight, in a potential major breakthrough after nearly six years of civil war.

The deal was brokered by Russia and Turkey, which back opposing sides in the conflict, but does not involve Washington, which has negotiated previous ceasefires with Moscow.

The agreement, hailed by Syria's government as a "real opportunity" to find a political solution to the war, comes a week after the regime recaptured second city Aleppo in a major blow to rebel forces.

Russian President Vladimir Putin, who announced the deal, said Damascus and the "main forces of the armed opposition" had inked a truce and a document expressing a readiness to start peace talks.

"Several hours ago, the event occurred that we have not only been waiting for but been working so much to hasten," Putin said in a meeting with his defense and foreign ministers.

Turkish President Recep Tayyip Erdogan described the agreement as a "historic opportunity" to end the Syrian conflict, which has killed more than 310,000 people and forced millions from their homes.

Syria's army said it would halt all military operations from midnight (2200 GMT on Thursday) and a leading opposition body, the National Coalition, voiced its support for the truce.

Putin said he would also reduce Moscow's military contingent in Syria that has been flying a bombing campaign in support of President Bashar Assad since last year.

The Kremlin strongman, however, said Russia would continue to fight "terrorism" in Syria and maintain its support for the regime.

Russian Defense Minister Sergei Shoigu said seven opposition groups, including the powerful Ahrar al-Sham, had signed the deal and those who failed to adhere would be considered "terrorists."

Erdogan indicated Turkey would press on with its four-month incursion into Syria against Islamic State group (IS) jihadists and Kurdish militia.

Syria's army said the deal did not include IS and the former al-Qaida affiliate al-Nusra Front, now rebranded the Fateh al-Sham Front.

That could cause complications in areas like Idlib in northwestern Syria, where Fateh al-Sham is allied with rebel groups that have signed on to the deal.

Syria's political opposition and rebels confirmed their backing for the truce, saying it applied to all parts of the country.

"The agreement is for all of Syria and contains no exceptions or preconditions," said Osama Abou Zeid, a legal adviser to rebel groups fighting under the Free Syrian Army banner.

The agreement comes after Turkey and Russia brokered a deal to allow the evacuation of tens of thousands of civilians and rebel fighters from Aleppo.

Moscow and Ankara are now pushing for peace talks between Damascus and the rebels to start soon in Kazakhstan's capital Astana.

"Now we need to do everything for these agreements to come into force, for them to work, so that the negotiating teams that have been or are being formed promptly and as soon as possible arrive in Astana," Putin said.

U.N. peace envoy Staffan de Mistura said he hoped the agreement would "pave the way for productive talks" in Kazakhstan, but also reiterated he wants negotiations mediated by his office to continue early next year.

Russia and Turkey have both said the peace talks they will supervise are meant to supplement U.N.-backed peace efforts, rather than replace them entirely.

Russian Foreign Minister Sergei Lavrov said that Russia, Turkey and Iran were arranging for the talks and pressing for other key international players to get involved.

Lavrov said Moscow would invite Egypt and try to attract other regional powers such as Saudi Arabia, Qatar, Iraq and Jordan.

The U.S. State Department called the ceasefire deal a "positive development" and said it hoped it would lead to fresh negotiations on Syria's political future.

Abou Zeid confirmed the truce deal was intended to pave the way for new talks in Astana, with the High Negotiations Committee that has represented the opposition at previous negotiations expected to participate.

Turkey has long backed Syria's opposition, and its relations with Russia soured last year after Ankara shot down a Russian warplane.

But the two countries have worked closely of late on Syria and Turkey was conspicuously quiet as Assad's forces retook Aleppo.

In the hours before the ceasefire was to take effect, the Syrian Observatory for Human Rights, a Britain-based monitoring group, reported at least 17 civilians, including six children, were killed in air strikes and artillery fire on rebel-held territory near Damascus.

Let's hope the Syrian army does not treat this ceasefire like all the ones it agreed to in Lebanon, breaking everyone of them.

1/ the big loser is assad: other countries now decide of peace or war, he has no more say in it lol
2/ funny how the M8 childish gang here keep saying that the oppostion or isis is the same thing whereas major countries make a distinction... brainwashed hezbis they are lol

It is clear to see from your comments. That you are a loser here peace.

Assad is here to stay.

your lack of counterarguments just prove that i am right, and all you have left is barking... you believe russians will ally with your iranian buddies and let assad do what he wants when they did the job for him?

give us argument to prove the contrary ya chattour anta.... LOL

It is clear to see that you are in a state of panic. Calm down and accept your defeat.

Your people could not overthrow Assad, you had your chance and failed now move on.

as i said: no arguments to refute me, nothing... just pityful barkings and lamentations over your inefficiency, as usual...
yalla: prive me wrong for once:
1/is it assad and russians or just russians and turks who decided of truce now?
2/ you always put opposition and rbels in the same bag as isis while major countries differentiates them, right or wrong?

easy questions, no? or too difficult for your unique neurone to handle?

Are these major countries the same ones that differentiated that Iraq indeed had weapons of mass destruction?

oops after destroying that nation & killing over 2 million people they admitted they were mistaken.

But hey who cares, they said sorry, didn't they?

Your logic is beyond any civil debate.

Assad still sits on power, he still govern the part of Syria that is under his control.
That Russia and Iran negotiates on his behalf, makes no difference Assad still remains the President of Syria.
Turkey already dropped their demand that Assad should be overthrown.

Now I read many of the Salafi takfiris outlets twitters, sympathizers Al Jazeera/Al Arabiya and White helmets takfiris words, I can see they are all in the same state of panic as you.

They keep assuring each other that Iran have lost, even though the liberation of Aleppo proves that the Axis of Resistance have risen to new heights.

Mystic, you are giving this shill far too much time.

anyone who ran like a propagandist day after day claiming Assad will be hung & dragged through the streets within a few months 6 years ago has the right to ask questions about Assads position now?

This shill is here day after day to spill propaganda hate with no substance to his claims...zero, totally bankrupt.

You are right roar.
Yet I still find it amusing to poke them.

i see that poor purring kitten still is unable to read an article! lol
"Are these major countries the same ones that differentiated that Iraq indeed had weapons of mass destruction?"
have you read the article at least or just answering out of your stupid hatred?? => The deal was brokered by Russia and Turkey
so learn to read purring kitten...

and miss tic: what is your beloved president ruling over? a third of syria? you call that victory? LOL the boss of syria are now the russians not assad anymore: he has become their puppet....iranians thus hezbis have no more say either, just russian instruments now... enjoy!
lol

I respect mystic and the roar for being great Lebanese citizens and would like to wish them and their families the happiest of holidays and a very happy new year!

and still miss tic cannot answer two easy questions... it tells you a lot about his IQ level....

my opinion on who could be Lebanon's next President at the time "obeid" was based on circumstances of that time.

Clearly I was mistaken, as were most...The majority thought "the General" has no chance.

But here's the difference between myself & paid shills with an agenda.(tex,peace,terr,edawn,bani,ice-norma) etc etc

I congratulated & wished the best for Lebanon on their choice of Pres.
I did not continue with my mistaken opinion as you & your fellow paid shills continue to do after you have proven to be mistaken, in fact your propaganda just defies reality, yet you press on with it no matter how wrong you have been.
Thats called paid servants to push certain agenda & cannot stop the propaganda they are paid to push no matter how many times their lies are clearly proven to be wrong.

I disrespect peace for saying that M8 and the hezbis are brainwashed. The reality is that M14 are the ones misinformed and brainwashed.

I respect Mr. the_roar because he is not here every day.