Clashes Near Damascus Despite Syria Truce 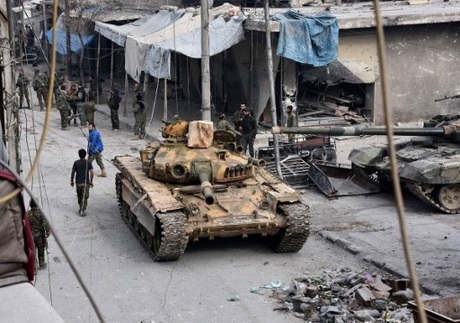 Syrian pro-government forces clashed with rebels around the main water source for Damascus on Thursday, a monitor said, threatening a fragile ceasefire as it entered its seventh day.

The Syrian Observatory for Human Rights said regime troops backed by fighters from Lebanon's Hezbollah movement were battling to recapture parts of the Wadi Barada region from rebels.

The area north of Damascus is the main source of water to the capital.

The Observatory, a Britain-based monitor of Syria's conflict, said regime forces had late on Wednesday launched "dozens of air strikes on parts of Wadi Barada along with artillery and rocket fire, killing a firefighter."

Fighting has continued in the area despite a nationwide ceasefire brokered by regime backer Russia and rebel sponsor Turkey, which has brought quiet to large parts of Syria.

The regime says forces in Wadi Barada include former Al-Qaeda affiliate Fateh al-Sham Front, previously known as Al-Nusra Front, which Moscow and Damascus say is excluded from the ceasefire.

Rebels deny the group is in the area.

The capital's water supply has been cut since December 22, with the regime and rebels trading accusations over responsibility.

The opposition-controlled Rashidin district on the western outskirts of Aleppo was also bombed, it said, killing a rebel fighter and wounding eight others.

The ceasefire agreement is meant to pave the way for peace negotiations later this month in the Kazakh capital Astana, but Ankara warned on Wednesday that violations of the truce by President Bashar al-Assad's government were putting the talks at risk.

"... battling to recapture parts of the Wadi Barada region from rebels":
this is the only way to guarantee the water supply to the population, water which was sabotaged and cut deliberately by the 'rebels'...

btw, the Turkish-led extremists aren't any better than the Saudi-led ones, all of them are savage terrorists.

what about you shias who besiege syrian villages, starve them, deprive them of food and water, and medical aid.

btw, why this secatarian indication! shia this shia that! is it because you feel bittered due to your frustration!?....keep striking your keyboard, it's free.

i agree southern the shias are helping the syrians become refugees in lebanon. When you stop saying salafi wahabi in every single one of your comments, then please ask me about my occasional use of the term shias.

How about the Salafi rebels depriving the civilians food in the Salafi occupied areas of Syria?

When Aid convoys gets into besieged areas, then the salafi rebels always takes all of the aid for themselves and let the people starve.

Salafism and Wahabism are ideologies but not sects, they are extremist terrorist ideologies that bear all responsibilties for what's happening Middle East, thus favouring the zionist entity, try to think a little bit.... i'm realy astonished of how you can support and defend such scum....

Southern ... All that time and the water flowed from rebel controlled areas till the Assad clan barrel bombed the facility and then you have the gall talking about extremists. The biggest and by far the worst criminal in Syria is the Assad regime and the sectarian militias that support that monstrous regime.

Southern - when the shock troops of the Assad regimes are Shia sectarian militias, what do you like people to call them?

"btw, why this secatarian indication! shia this shia that!"

who is fighting in Syria and besieging entire cities other than the shia of the evil ayatollah. stfu!

Every rebel group in Syria have direct links and support to Al Nusra.
They are all salafis, and they must all die.

So what is this ceasefire deal?

it is sectarian fanatics like you who give the shias a bad name.

It is yahoudis like you, that a betrayers of Lebanon.
Maybe you are already washing dishes in some Israeli falafel resturant?

"Rebels deny the group is in the area." Maybe they just changed their name again?