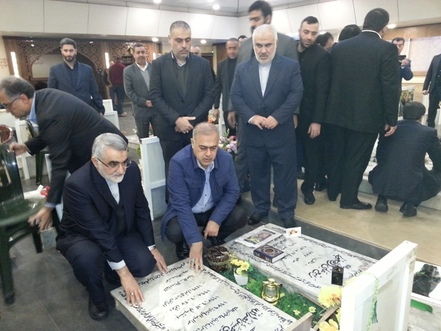 Chairman of Iranian Parliament's National Security and Foreign Policy Committee Alaeddin Boroujerdi, said on Friday that the Islamic Republic of Iran is ready to send military aid to the Lebanese army shall the Lebanese government authorize it.

“Iran's permanent and firm stance is to stand by the brotherly Lebanese Republic of Lebanon, government and people. We therefore reiterate our firm will in the field of arming the Lebanese army,” said Boroujerdi after placing a wreath on the grave of slain Hizbullah official Imad Moghnieh and his son.

He added that the issue “has been seriously discussed with (former) Defense Minister Samir Moqbel during the latter's visit to Iran.”

“The matter is at the Lebanese government's disposal,” he concluded.

During his visit to Iran in March 2016, Moqbel, told Iran that when the sanctions are lifted on Iran, then the Lebanese government would study Iran's will to support the Lebanese army.

Saudi Arabia has halted a 3 billion dollar in military program for military supplies to Lebanon in protest against Hizbullah's policies.

Now that Aoun is president, I am sure he will get it approved.

Great news. Finally Iran can get the chance to support the Lebanese army.

With a friendly Lebanese Government.

was the hezbollah-Aoun Miqati government not friendly enough for you and Iran?

flamethrower, you got to be the worst most transparent liar history has ever known. Shameless sick person

the FPM had 11/30 ministers in the Miqati government and you consider that not iran friendly enough? lol

but flamethrower is a 'Christian' according to Al Manar hehehe!

exactly, if these filthy iranians are serious they would announce the amount and details of the arms just like KSA did when it offered to arm the Lebanese Army with $3 billion worth of weapons.

Interesting this new yet old tune of Iran's readiness to arm the LAF comes on the eve of aoun's visit to KSA.

are you conversing or entertaining in your above vomit because as far as we know you only post for those two purposes only.

It is expected the Saudi grant will be reactivated during or following aoun's visit to Riyadh. Here comes the majoos with their empty offers once again. Great but not suspicious timing!

"... it will sever all military aid from the US, other western countries and other Arab countries. "

which means nothing to be cut, since Lebanon receive nothing... but only some street fight guns from an interested warmonger!

Iran will arm the LAF, so stop whining

Some sanctions/embargo were lifted but not arm exports
"The embargo on the export from Iran of all arms and related materials will remain in place until 5 years after the JCPOA Adoption Day. Different from other UN embargoes where arms can be supplied to governments if advance approval has been received from the relevant Sanction Committee, for the sanctions on Iran it is the Security Council that has to give approval."

Not a good idea to have Master of terrorism in the region arm our hero Army!

You are a real stooge texas, you wrote on several occassions that "Iran would never arm the Lebanese Army" Now that they will, you accuse the Army of being an Iranian Army and the whole country is a province?

Very 'Lebanese' of you. As days flies by, I began to realize you are Israelis most of you.

Mr. Mystic is scoring points with me and earning my utmost respect for beginning to realize you are Israelis most of you.

we don't need 'ansarullah' to tell us.... Marwan Charbel the minister of interior at the time was greeted by the shias in dahieh with the same " Ma'bdna Jeish blibnein Illa Jeishak Ya Hussain".

broke on their promise you say?! Sure when your terrorist shia leader calls for the death of Al Saud and your miracle child foreign minister votes against or abstains from voting to condemn the torching of the Saudi Embassy by your government paid iranian hooligans.

This Boroujerdi guy seem to be a cool fun guy, someone one can have a pint and play pool with down at the pub. Here we can see him visiting one of Dahier's Arcades emporiums playing on an old fashioned Pinball machine, didn't even bother him that it has broken legs. Don't shake it too much Alaeddin it will TILT!! and you will lose your chips.

yes, @flametroller. your shrink called and said that you're to be given another enema if you keep saying frontal lobotomy again ( which happens to be what @mowateh says exactly ).. just doing my job, looking after your mental health.. dont thank me.

There was never an iranian offer and if ever there was one, it would only need an acknowledgment by the lebanese cabinet and not the parliament as this filthy iranian claims. Parliament approves Laws and that is why it is called the legislative branch. The Miqati government was 100% pro iranian government and nothing was put on the table. The mentally ill paid troll @flamerotten comes up with excuse after excuse to earn his miserable living.

that is why they call them serial takiah liars... it is in their heretic religion.

21 posts on this article alone, and the iranian mouthpiece who goes by the name flamethrower among 100 other different screen names claims he has a life.

I have gained so much respect for Mr. Flamethrower because he gave so much meaning to Mr. Galaxy's life and now.

My respect for Mr. Flamethrower is growing exponentially for helping Mr. Liberty channel his hate online rather shoot people in some supermarket out of frustration.