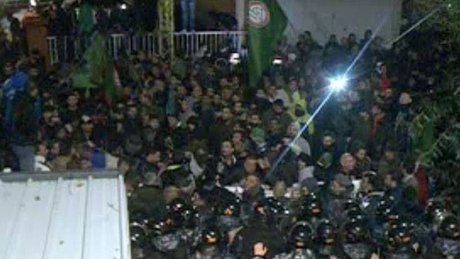 Supporters of AMAL Movement attempted to storm al-Jadeed TV's building in Beirut on Tuesday evening in protest at a satirical TV show that they deemed insulting to AMAL founder Imam Moussa al-Sadr.

TV footage showed hundreds of demonstrators trying to push their way through police and army lines with the aim of storming the building.

Protesters also hurled rocks and firecrackers at the building, smashing several windows and injuring two al-Jadeed employees and a policeman.

The demonstrators eventually dispersed after around two hours of rioting and following the arrival of huge army reinforcements.

Al-Jadeed deputy chairwoman Karma Khayyat had urged the army to “intervene to put an end to the behavior of (Speaker Nabih) Berri's supporters outside al-Jadeed's building,” calling the protesters' actions “an insult to Imam Moussa al-Sadr.”

An army force eventually arrived outside the building to reinforce security lines.

Army forces also deployed along the Salim Salam bridge and on the highway near the Sports City, state-run National News Agency reported.

“Those attacking al-Jadeed's building did not watch the episode that they are protesting against and al-Jadeed does not accept any insult against Sayyed Moussa al-Sadr,” Khayyat stressed.

“We are being threatened with bullets and the cutting off of broadcast, but this will not deter us from saying the truth,” Khayyat added.

Earlier in the day, AMAL supporters had blocked the highway linking the city of Sidon to the South, which was eventually reopened.

Media reports said AMAL supporters have also forced many cable TV providers in Beirut, Dahiyeh, the South and the Bekaa to remove al-Jadeed from their service.

In its latest episode on Sunday, the satirical show “Douma Cracy” hosted ex-MP Hassan Yaaqoub, the son of Sheikh Mohammed Yaaqoub who disappeared along with Imam al-Sadr during a 1978 visit to Libya.

Ex-MP Yaaqoub is an opponent of Berri and has criticized his handling of al-Sadr's case.

According to An Nahar newspaper, the episode “hinted that Berri knows the location in which al-Sadr vanished.”

The TV show is directed by controversial director Charbel Khalil.

AMAL MP Hani Qobeissi had on Monday accused al-Jadeed of “insulting” al-Sadr whom he described as “the first defender of Lebanon.”

“The language of mockery and disrespect showed that your $70 million contract with some remnants of the Libyan regime to print their books is more important to you than all the causes of the country and its people,” Qobeissi said in a statement.

“AMAL Movement with its martyrs, wounded, cadres and leader will not confront you, because you are too little for that,” the MP added.

Resistance Brigades gunmen had attacked al-Jadeed's building in 2012 in protest at an interview with Islamist cleric Ahmed al-Asir.

Probaly the same mockery that you people make everyday texas.

You really believe your own crap don't you?
You're trying so hard to be this other guy, it's painful to watch texas.

Al Jadeed is a provocative TV station, it's not the first time they mock leaders and martyrs.

Since when is AL jadeed a march 14 channel?

Let's not forget that Al Jadeed channel listened deeply and sympathetic to the Salafi criminal Ahmed Al Assir and made interviews to hear him out, the murderer of proud Lebanese Soldier martyrs.

People have the right to protest legally but not to threaten or engage in violence. What I find outrageous though is that many of our Shia friends go apocalyptic when the name of Musa Sadr is mentioned without the honorific of Imam and Sayyed yet have no qualm about calling Rafiq Hariri all types of names.

Al Jadeed is the filth, and provocative TV station.

yeah al jadeed is and happens to be nassrallah's mouthpiece.

but the same heretic and his 20 fake accounts were defending Al Jadeed and calling it the voice of reason when the STL accused it and its Chief Karma Khayat of contempt of court.

it was freedom of speech then, but now it does not apply when it touches their heretic leaders.

This is why Muslim countries will always go backwards. They don't want free speech or anything. The only thing they know is to live under the boot of a za3im or a leader.
Is this also the west foult?

The real deal here is probably a commercial/ego disagreement between Khayyat and Berri.
One is using Al Sadr and the other is using freedom of the press.
Cut it out boys and share the corruption cake.

Crazies! Whatever that was, only uneducated sheep can respond to some satirical bad joke with this behavior.

lowlife scumbags. Sadr was not a Prophet nor a Saint. He was a politician warlord who formed a sectarian militia that killed and still kills.

No arrests made or will ever be made...... aoun implementing the rule of the law. But the civil activists who protested against the waste crisis are all in front of the military courts;)

Violence is bad, but protesting is as much a right as free speech is. In any case, Lebanon is not exactly the best place to mock the religious leaders of other sects.

always ready to come up with an excuse for your thugs.

Al Assir is yours.

Ban Ki Moon is the next Dalai Lama. Haven't you heard?