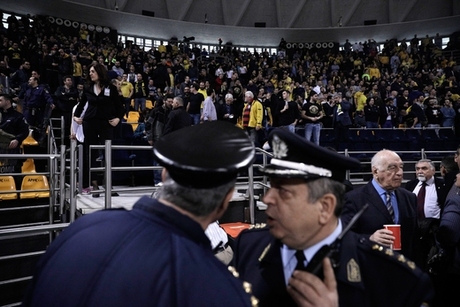 Riot-trained police clashed with Aris supporters before and after the game with flares being lit causing a chocking atmosphere inside the Nick Galis Hall.

The fans threw broken plastic seats and other objects at police.

The start of the game was delayed one hour when Panathinaikos refused to play unless the agreement calling for just 1,100 supporters from each club to be present at the facility be kept.

Just before the start of the game some 500 extra Aris supporters stormed the gates and entered the indoor stadium illegally.

The visitors agreed to play after being guaranteed that the supporters who entered without tickets would leave.

No injuries were reported by police.