Army Pounds IS Posts in Bekaa Outskirts amid Helicopter Raids 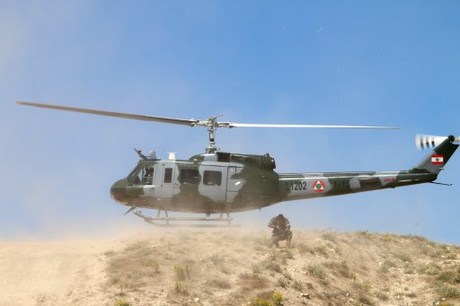 “It is firing heavy artillery and multiple rockets launchers at the posts of the militants after detecting suspicious movements,” NNA said.

“Helicopters are hovering heavily over the area and the sounds of shelling are being heard clearly in the northern Bekaa region,” the agency added.

“More than 20 IS leaders and members were killed and wounded in Lebanese army air raids on Ras Baalbek's outskirts,” it added.

TV networks later said that the army had targeted "a meeting for the IS group in Ras Baalbek's outskirts, killing and wounding several militants."

Jihadist militants from the IS and the rival Fateh al-Sham Front are entrenched in rugged mountains along the Lebanese-Syrian border.

The Lebanese army regularly shells their positions while Hizbullah and the Syrian army have engaged in clashes with them on the Syrian side of the border.

The two groups overran the northeastern border town of Arsal in 2014 and engaged in deadly battles with the Lebanese army for several days.

The retreating militants abducted around 35 troops and policemen of whom four have been executed and nine remain in captivity.

God Bless the Lebanese Army the sole defender of Lebanon and Lebanese.

I just farted in your general direction, did you hear it?

We all heard it. You are so funny and smart:)

Look at the Lebanese Army equipment, this look like something from an old Vietnam movie.

If America supports the Lebanese Army so much, then how come they never gave them Black Hawk Helicopters, Apaches or M1 Abrams?

They seem to happily give it to Saudi Arabia whom in return gets those machines blown up in Yemen at the hands of the Ansarullah.

texas neocon, it is pretty simple as I told you hundred times.
If the Lebanese Army ever accepted any advanced weaponry from Iran or Russia/China, then the America and the West would put full sanctions on Lebanon as a state, not just individuals as they try now.

That means the same sanctions they put on the honorable North Korea.

Even under the Syrian presence, America didn't put full sanctions on Lebanon back then neither.

That is another reason that President Aoun the commander in chief of the Lebanese Army you claim to love, mentioned that the Resistance and the Army are one and the same.

of course aoun will say this miss tic, he owes them the presidential chair... but he has been repeating for decades that hezbollah was a terrorist organisation, i guess he was lying and a takfiri zionist at the time, moo hek?

spare us your fake patriotism miss tic, for one who has pledged allegiance to the iranian revolution cannot be a true lebanese....

Old picture..they are not showing the Iranian helicopters gifts or 120,000 missiles that can reach as far as Israel nuclear reactor.

Good job, soon these Wahhabis will go the way of the dodo and Bin Laden.