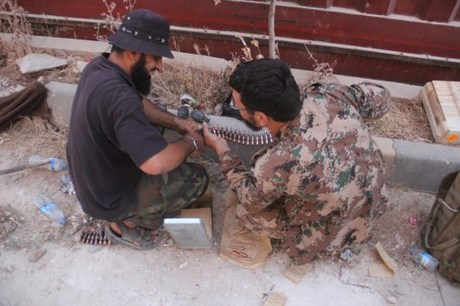 An explosion rocked an area on the peripheries of the eastern border town of Arsal on Tuesday, state-run National News Agency reported.

Media reports said the blast resulted from the accidental detonation of an explosive device that members of the jihadist group Fateh al-Sham Front were preparing in the the Khirbet Younin area in Arsal's outskirts.

Militants from Fateh al-Sham and the rival jihadist group Islamic State are entrenched in rugged mountains along the Lebanese-Syrian border.

The Lebanese army regularly shells their positions while Hizbullah and the Syrian army have engaged in clashes with them on the Syrian side of the border.

The two groups overran the town of Arsal in 2014 and engaged in deadly battles with the Lebanese army for several days.

The retreating militants abducted around 35 troops and policemen of whom four have been executed and nine remain in captivity.

This is so funny, they remind of of the shia on the south storing rusty katyusha rockets in their building basements and garages for their next Israeli confrontation. Then, bam boom. A building collapses, its inhabitants vanish.... ehhhh it was caused by an earthquake yeah right!

the only ones who can find these two cases similar are israelis. for lebanese people there is a big difference between alqaeda/daesh (who target lebanon) and hezbollah's weapons (who defend lebanon)

as if the whole lebanese population agrees with hezbi weapons! LOL
clearly you believe that hezbollah represents the whole of the country, poor buffoon you are.....
you only represent iranian hegemony as you pledged allegiance to the iranian revolution not to lebanon pityful antilebanese mooowaten....

keep whining you losers, we lebanese will keep upholding the resistance and shoving it in your rat faces

you are far from being lebanese mooowaten.... pledging allegiance to the iranian revolution makes you far far away from being lebanese, whatever you shout or pretend...
on your flag it is not written "lebanese" resistance but "islamic" resistance showing how close you are to ISIS or el qaeda in your way of thinking!

and your pathetic rhetoric that all those opposing you are israelis or takfiris or whatever the propaganda of the day show how narrow your one neurone brain is...

It's just Nusra, no one cares about their numerous cover names.