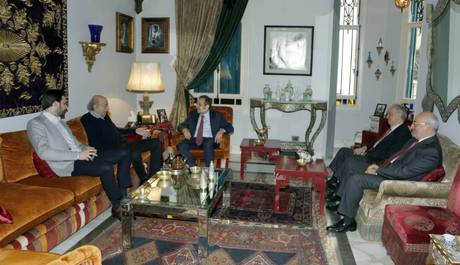 The meeting at Jumblat's residence in Clemenceau was held in the presence of his son Taimur, Education Minister Marwan Hamadeh and MP Ghazi Aridi.

The PSP's al-Anbaa online newspaper reported later in the evening that the meeting between Jumblat and Bassil “was characterized with total frankness.”

“They stressed the importance of direct communication away from the tendentious rumors that are seeking to distort the bilateral relation,” al-Anbaa said.

The two leaders also called for “openness and for consolidating partnership and cooperation,” the newspaper added.

Earlier this month, Jumblat had lashed out at an electoral system proposed by Bassil that involves sectarian voting in the first round as “divisive” and the product of a “sick mentality.”

“The mere mention of sectarian voting is a termination of partnership,” Jumblat said.

In the first round of the proposed system, voting takes place in the current 26 districts and voters are not allowed to vote for candidates from other sects. Two candidates for each sectarian seat qualify for the second round during which voting would take place in 10 newly-defined electoral districts and according to a non-sectarian proportional representation polling system.