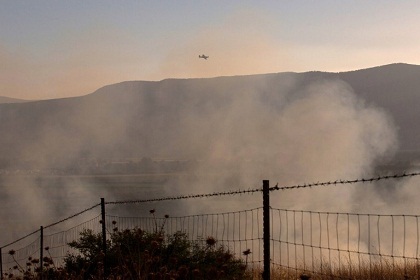 Israel shot down what it identified only as "a target" over the occupied Golan Heights on Thursday, hours after Syria accused it of hitting a military position near Damascus airport.

A military spokeswoman refused to comment on Israeli media reports that the object was a drone.

Israel has not confirmed or denied the reported Damascus attack.

But Intelligence Minister Yisrael Katz said it was consistent with Israel's policy to prevent arms transfers through to Hizbullah, while stopping short of confirming his country was behind the incident.

"We are acting to prevent the transfer of sophisticated weapons from Syria to Hizbullah in Lebanon by Iran," Katz told army radio.

"When we receive serious information about the intention to transfer weapons to Hizbullah, we will act. This incident is totally consistent with this policy."

In Moscow, the Kremlin called for restraint and the foreign ministry condemned the attack.

Kremlin spokesman Dmitry Peskov did not say if Israel had warned Moscow of the strike, saying only that their defence ministries "are in constant dialogue".

Israel has conducted multiple air strikes in Syria since that country's civil war erupted in 2011, most of which it has said targeted arms convoys or warehouses of its Lebanese arch-foe Hizbullah, which is a key supporter of the Syrian regime.

Last month, it said it had carried out several strikes near the Syrian desert city of Palmyra, targeting what it said were "advanced weapons" belonging to Hizbullah.

The strikes prompted Syria to launch ground-to-air missiles, one of which was intercepted over Israeli territory in the most serious flare-up between the two neighbors since the Syrian civil war began six years ago.

Israel seized 1,200 square kilometers (460 square miles) of the Golan from Syria in the Six-Day War of 1967 and later annexed it in a move never recognized by the international community.

Around 510 square kilometers of the Golan are under Syrian control.

LoL I'm pretty sure it wasn't a Sukhoi T50 ! It was a hizbi drone equipped with an IED. The same Da3is use in Mosoul, what a coincidence!

Mowaten, I heard you loud and clear. Your parents obviously failed your education, that's probably because themselves are uneducated. I bet you burp and fart during dinner.
Hopeless houthians.,,

the iranian troll has no shame no honor
devil worshiper

The Supreme Leader of the Islamic Republic of Iran issued instructions a few hours ago to the Islamic Resistance in Lebanon. Its response was decisive, swift, and unwavering.

it's been a good day for Lebanon.

I just hope assad tries to fly one 'real' fighter jet near the israeli border and watch his entire air force gets wiped out the face of the earth in 60 seconds.

i doubt it would even take that long.

I could not stop laughing when one of those paid guest experts was asked why the Syrian defense systems did not engage the israelis, he replied " a sign of syria's deterrent force is to economize using this deterrent force".