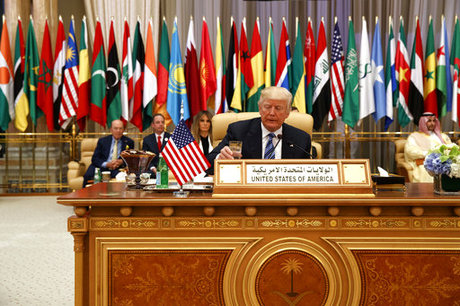 U.S. President Donald Trump compared Hizbullah in a landmark speech on Sunday to extremist organizations such as Islamic State and al-Qaida, as he lauded the Lebanese army for fighting IS and Lebanon for hosting a huge number of Syrian refugees.

“We now face a humanitarian and security disaster in this region that is spreading across the planet. It is a tragedy of epic proportions. No description of the suffering and depravity can begin to capture its full measure,” said Trump in a speech focused on terrorism during the Arab Islamic American Summit in Riyadh.

“The true toll of ISIS, al-Qaida, Hizbullah, Hamas, and so many others, must be counted not only in the number of dead. It must also be counted in generations of vanished dreams,” Trump added.

Applauding the Gulf Cooperation Council for “blocking funders from using their countries as a financial base for terror, and designating Hizbullah as a terrorist organization last year,” the U.S. leader praised Saudi Arabia for joining Washington this week in “placing sanctions on one of the most senior leaders of Hizbullah,” Sayyed Hashem Safieddine, who is the head of the party's powerful executive council.

“Of course, there is still much work to do,” Trump added.

He lamented that “from Lebanon to Iraq to Yemen, Iran funds, arms, and trains terrorists, militias, and other extremist groups that spread destruction and chaos across the region.”

“For decades, Iran has fueled the fires of sectarian conflict and terror,” Trump charged.

He also applauded Lebanon, Jordan and Turkey for “their role in hosting refugees.”

Trump also acknowledged the Lebanese army's role in fighting IS militants on the eastern border, saying “many are already making significant contributions to regional security” and that “the Lebanese Army is hunting ISIS operatives who try to infiltrate their territory.”

A defiant Safieddine had stressed earlier on Sunday that the U.S. administration will not be able to “harm the resistance,” three days after he was blacklisted by the U.S. and Saudi Arabia in an unprecedented "joint terrorist designation."

“America's malice and siege against our region, countries, homelands and societies prove that it has become a lot weaker than it was in the previous years and decades, and that can be evidenced by the skepticism on Trump's continued leadership of the United States of America and the daily attacks on him from most U.S. media outlets and the world's media empires,” Safieddine said.

“What they will get is further screaming in the media and everything they have done will come to an end,” Safieddine emphasized.

Thank you Mr. President for recognizing the Houthian Hezbollah for what they are: a danger to humanity and the environment.

I look forward to meeting you again in Washington next month.

Salman paid Trump 148b just to mention that phrase, while most Saudi people are jobless and can't pay for 3 days meals.

he just pulls out figures and make statements out of his rear as usual. Nobody takes him seriously.

anyway, i never take you serously, and most of the decent people in this forum...

it is a shame southern you quote articles that just discredit your BS:

From the same article :

"The Saudi government spends several billion dollars each year to provide free education and health care to all citizens, as well as a variety of social welfare programmes – even free burials. The government also provides pensions, monthly benefits and payments for food and utility bills to the poor, elderly, disabled, orphans and workers who are injured on the job."

plus the $500 per month job the poor woman is talking about is equal to or higher than the income per capita in your country of origin, Iran.

shame on you, read peperly, and not what the gvt try to do but doesnt do.

"In a country with vast oil wealth and lavish royalty, an estimated quarter of Saudis live below the poverty line"

This is for you my friends gigahabib and Southern.
A greetings from our friends in Yemen.

funny how in two posts southern goes from the majority of saudis are poor to a quarter are poor....

and fails to say that in iran over 75% of the people are poor busy they are financing their foreign militias.... LOL

how powerful they are... smashing the American / Saudi machinery with basic weapons.....

in unemployment statistic, a quarter part of a population is a vast majority.... like saying that 1.000.000 in Lebanon are poor and unemployees, vaaaaaaaaaaaaaast majority.

looks like you never went to school southern? poor boy.

"majority" in any dictionary means over 50%, capice?

so now go to school to learn the basis of maths....

to the illiterate heretic anything above 10% means "the vast majority"

it is the same when he says the vast majority of Lebanese support his iranian criminal militia.

Southern look at this, uploaded a few minutes ago.
The Ansarullah can even bring the mighty F-15s down.

southern stfu and disappear. You don't even qualify for an idiot.

"so, the Saudis are poor like you in minds and education level, besides they can't affaord 3 meals but Salman gives a gift 148b to Trump, to provide him more armas that they can't use."

so does the country that a few days ago you said they were the most civilissed in the middle east... while their poverty level reaches 75%... LOL

“Despite the promises of the Rouhani government and the U.S. administration’s belief that the billions of dollars released to the mullahs’ regime would provide services to the people, thus far the only path of expenses has lined up with purchasing Russian sophisticated weapons or reenergizing the Revolutionary’s projects that would only embolden the elite,” according to an article in April 2016 of the Iran News.

poor southern, now go to bed you have school tomorrow

“The regime is using the new funds for its terrorist activities abroad…Yet, at the same time, the Iranian people have become poorer. Some officials of the regime have acknowledged that around 80 percent of Iranian people are living below the poverty line,” said Hossein Abedini of the Foreign Affairs Committee of the National Council of Resistance of Iran (NCRI)."

Absurd conversations... who gives a s**t about Saudi or Iran... two retared countries that should be an example for none!

agreed @patriot but the difference is that Saudi Arabia does not impose its way of life on the Lebanese and does not have a terrorist organization like hezbollah in Lebanon. So if KSA gets stronger and can counter Iran regionally, then hezbollah is weakened and Lebanon will have a chance to perhaps be a normal country.

Funny how an easily googleble fact can drive the Ayatollah corner into a frenzy.

That is also true Warrior...

Southern...... 3 hours ago
Salman paid Trump 148b just to mention that phrase"

a steep price for one statement, wow!:)

the shia devil worshipers are seething with anger;)

words, only empty words, because getting 148b is tooo much money... till yesterday, Trump used to call these people cattle, and terrorism sponsor responsible of 9/11 terror attack..

btw, while on the ground, things are different, N Korea is standing up infront of the american hostilities, Trump recently lowerd his pants while the wahhabi state is isolated, it has only Usa and Israel as allies, those 2 coutries despise the Saudis, anyway.

so, eat your sandwish and stay quiet.

you mean like this one that applies to you and your boss in the picture.

Southern, shame on you for activating your fake accounts!

You Will Be Caught!

Trump Likens Hizbullah to IS, Qaida

Hezbollah is worse than IS and Al Qaeda.

Hezbollah is as dangerous to mankind as dash and Qaïda combined!

A threat that Should be addressed as soon as possible.

while comforting each other!!!!...the Lebanese resistance is there and will remain as a pin in your blind eyes.

so cut the BS will you?

hey small john = you do NOT have the exclusivity of telling who is patriot and who is not!
If one criticize hezbis you low binary people automatically say they are zionists...so practical, so easy, avoids any further thinking which your brain cannot handle....

hezbollah is NOT A LEBANESE RESISTANCE.... it is a MILITIA funded by iran, paid by iran , to whom they pledged allegiance...

one that pledges allegiance to a foreign country how dare you call them patriots? i call them TRAITORS as those like you who supports them!

True, they are all filthy murdering militias

mowaten and his 'incorruptible' alias predicted 2016-2017 will be the end of saudi arabia and its financial demise. Here is Saudi Arabia signing contracts worth $300 billion with the United States.

Trump lies about everything in general, so only Saudi stooges would take his claims on this seriously.

unlike you who never lies;)

If it annoys the filthy murdering militia, then it's good

never ceases to amaze me how these heretics come up with sources such as salon.com, counterpunch.org, and heretics.net!

iran and russia right behind but still you praise hezbollah which is an iranian tool...
and for you they pose no threat.. so keep your biased opinion for el manar and if you want to be credible then criticize hezbis and the threat they also pose...

those who dare criticize iran and hezbis are zionists to you not the same arabs you praise by showing this poll!.... LOL