Geagea: Struggle to Continue till March 14 Victory, Disarmament of All Groups 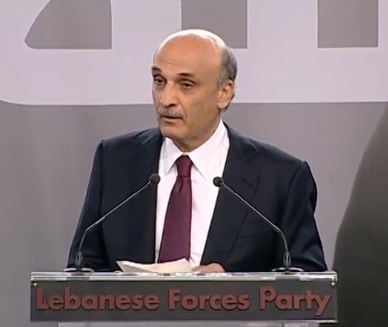 Lebanese Forces leader Samir Geagea announced Thursday that “struggle” will continue until the March 14 camp achieves “its final victory” and until the disarmament of Hizbullah and other armed groups in the country.

“Some believe that the 'secret struggle' had started in 1994 and ended in 2005, but actually the secret struggle is still ongoing and it will not stop before March 14 achieves its final victory,” said Geagea at a Maarab ceremony to launch a book titled The Story of Secret Struggle, which documents the period during the presence of Syrian forces in Lebanon when the LF was banned and Geagea was in prison.

“Some think that March 14 ended with the end of its organizational structure, but this is wrong, seeing as the cause will continue until we realize our dream of having a strong, effective state that extends its authority over all of Lebanon's soil,” the LF leader added.

Referring to Hizbullah's armed resistance against Israel's 1978-2000 occupation of south Lebanon, Geagea noted that the 1989 Taef Accord that ended the civil war had “stipulated that the Lebanese state would be responsible for resisting any Israeli attack.”

“But the (Syrian) tutelage authority contributed to the rise of the resistance in the South, and we are still suffering from that, but the struggle will continue until we get rid of all armed groups,” Geagea vowed.

And addressing future generations, the LF leader advised them “not to endorse any agreement before knowing how it would be implemented.”

“Until today, we are still paying the price of the Taef Agreement because it was implemented in a wrong way,” Geagea warned.

The civil war never ended as Hizbalot and Amal kept their weapons.we are still at war with the shia terrorists, its just that politicians don't have what it takes to say it out loud.

Spare us your diatribe! You lost all respect that you once had. You don't realize March 14th dream by electing a president who considers the iranian militia complimentary and part of the Lebanese army.

Dactor Geagea has earned my respect and captured my imagination for many many reasons chief among them:

Shoo Southern/bla-bla-blah? Ma fhimna shi.theres a good school in Paris for you it's called Henry IV. It's your last hope!

Bravo Ja3ja3 your getting there, I guess its his turn to remind us all about we shall never be defeated and we shall fight them on the beeches speech. Failed leaders in Lebanon continue to blame others and claim that heaven is theirs.