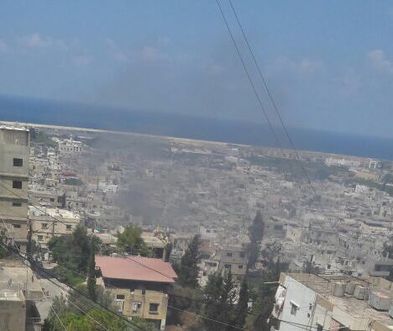 Cautious calm was engulfing the Palestinian refugee camp of Ain el-Hilweh on Wednesday afternoon after a ceasefire was reached between the rival parties.

The calm follows around seven days of fighting in the camp that pitted two small extremist groups led by Islamist militants Bilal Badr and Bilal al-Orqoub against the secular Fatah Movement and the Joint Palestinian Security Force.

According to the National News Agency, the joint force started deploying in the camp's al-Tiri neighborhood at 4:30 pm. The neighborhood was the main frontier in the fighting and is the bastion of the Islamist groups.

Armed clashes had intensified in the morning after the sounds of grenade and rocket explosions and machinegun and sniper fire echoed across the camp throughout the night, NNA said.

Gunshots and shells reached areas outside the clashes zone in the camp, such as the al-Zeeb, Taytaba and al-Sifsaf neighborhoods, as stray bullets reached the Sidon serail outside the camp and reportedly wounded two Lebanese security personnel.

Al-Akhbar newspaper reported Wednesday that after the noose was tightened on Islamists in al-Tiri neighborhood, Badr and fugitive Lebanese militant Shadi al-Mawlawi had threatened to “bomb Sidon and the army's posts with shells and rockets to press Fatah to accept a halt to the fighting.”

you must also remember giga heretic that it was the hezbollah appointed government of Miqati that released Mawlawi at the time and there were no M14 figures in it nor did M14 have authority to release him.

Additionally, there was nothing they could charge him with because he had done nothing at the time.