Aoun Pledges $30M for Developing Areas Liberated from IS 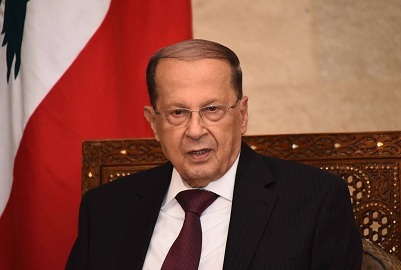 President Michel Aoun on Wednesday vowed that the state will implement developmental projects in eastern border areas liberated by the army from the hands of the Islamic State group.

“The post-liberation phase will be for developing these areas and for eliminating the remnants of the abnormal situations that prevailed over the past years,” Aoun told his visitors.

He revealed that “funds worth $30 million have been earmarked to execute a number of urgent projects,” hailing “the sons of these regions” for clinging to “their land and properties.”

The army began Wednesday morning a deployment operation in eastern border areas liberated from IS militants, as it started preparations to launch the fourth stage of Operation Dawn of the Outskirts, an army statement said.

There will never be a president like him, ever again!

That's a good plan Mr president and your first expenditure should be, for the sake of the Lebanese Republic, to accurately demarcate the border there with Syria. And as long as you're at it do it all the way from North to South-South to North, including pushing the Syrian regime to supply the UN with the needed documents showing the Lebanese ownership of the Sheeb3a farms. This way your tenure, Mr president, would have witnessed the Liberation of the outskirts of the Eastern border and of the last occupied part in the Southern border, putting that thorny file to rest once and for all.

Syria will never demarcate the border, no matter what pressure from the UN. The second the border is demarcated, Hezbollah will not be able to justify its arms by saying "we are resisting the occupation of Lebanon".

After everything Hezbollah did for Syria, this will never happen.

and those $30 million earmarked for development would end up as $3 million by the time he and his family get their hands on the money.