Hariri on Govt. Performance: Ten Months Have Passed with Tens of Achievements 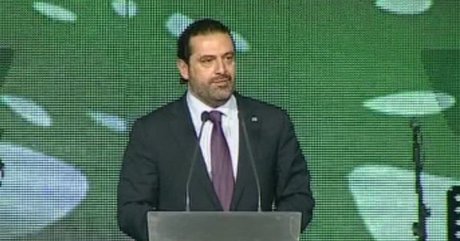 Prime Minister Saad Hariri boasted Friday that his government has made “tens of achievements” in the ten months that followed its formation, vowing that the country's situation will be even better in a year from now.

“My duty was and still is, first of all, to prevent collapse and fortify stability... so that we all address the difficult economic, social, security and political situations and thank God we were able to do that,” said Hariri in a speech at the Lebanese National Energy forum at Beirut's BIEL venue.

“We elected a president, formed a government, Parliament resumed legislation and the government resumed addressing the pending problems,” Hariri said.

“We renewed the term of the Central Bank Governor and put an end to the attempts to target the Lebanese pound and the monetary situation... During these ten months, we approved a new electoral law..., and put the gas and oil plan on the right track,” the premier added.

He also noted that the Syrian refugee crisis has been put “on the discussion table.”

“We prepared a well studied file that I took all over the world: to the European Union in Brussels, the White House, France, Russia, the Vatican, the Arab countries, the World Bank, the International Monetary Fund and all the places I visited,” he said.

“Ten months have passed with tens of achievements including the electricity plan, improving internet and reducing its fees... and managing to organize international conferences in Paris to support investments and in Rome to support the army and the security forces,” Hariri added.

“Does this mean that our situation is really good? Certainly not… but it is incomparably better than it was a year ago, and rest assured that the situation, a year from now, will be much better than today,” the PM pledged.

yeah, pat yourself on the back.
loser!

Please spare us this BS!