Mashnouq to Bassil: You'll Never be in Position Allowing You to Define My Jurisdiction 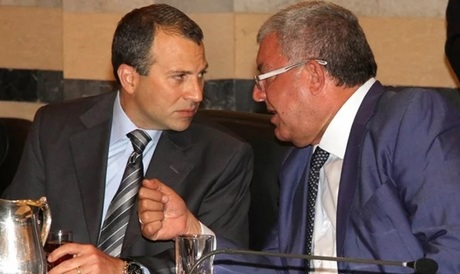 Interior Minister Nouhad al-Mashnouq lashed out fiercely at Foreign Minister Jebran Bassil on Wednesday in connection with the bickering over the mechanisms of the new electoral law.

“I'm surprised that a minister possessing experience and intelligence is failing to understand very simple things, such as that the ongoing debate over (voter) pre-registration is a political debate in which Minister Mashnouq is not a party,” Mashnouq said in a statement.

The dispute “is between Minister Jebran Bassil and those whom he apparently does not dare to name,” Mashnouq added.

“It seems that Minister Bassil is no longer differentiating between his limit and the limit of others or between his position as a minister and his dreams to become an authority above the Constitution, the state and the institutions,” the minister added, accusing Bassil of “unacceptable encroachment on jurisdiction and norms.”

“I directly tell Minister Bassil: You are not and will never be in a position allowing you to define, to me or to my political group, our jurisdiction, role or status in the Lebanese political system, which we exclusively draw from popular legitimacy, parliamentary confidence and the Taef constitution,” Mashnouq went on to say.

“Your simplistic belief that you are in a position allowing you to appoint or sack ministers or to change their portfolios and responsibilities reflects personal and private dreams that have no place in the Constitution,” he added.

Bassil had on Tuesday described Mashnouq as “a friend on the personal level” but accused him of “incompetence” regarding “the issue of the implementation of the electoral law.”

"There is political collusion from the side overseeing the elections, or the interior minister, who is dealing in a lax manner with the issue of (biometric voting) cards in order to hold the elections without them. The current conduct regarding the issue of the card is an attempt to underestimate the intelligence of the Lebanese and the Lebanese should revolt,” Bassil added, warning of “an intention to rig” the elections.

“Your simplistic belief that you are in a position allowing you to appoint or sack ministers or to change their portfolios and responsibilities reflects personal and private dreams that have no place in the Constitution,” he added.

but you enabled him to do exactly that by electing his father in law president knowing well that Bassil would be the actual president.

"ado.australia:
Yes... Israel now needs permission from Russia to fly in Syria and Lebanon and even in northern Israel! S-400 is a game changer and now only the US F22 raptors can do anything without Russian permission! israel is even more upset as they now cannot even enter Lebanese airspace!!!! Now Israel is finally vonerable in Lebanese airspace!"