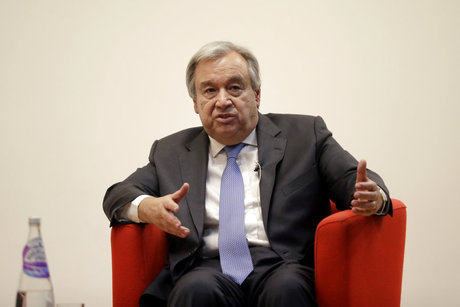 U.N. Secretary-General Antonio Guterres said Monday he was horrified by video footage showing migrants being sold as slaves in Libya and that these auctions should be investigated as possible crimes against humanity.

U.S. television network CNN aired the footage last week of an apparent live auction in Libya where black men were presented to North African buyers as potential farmhands and sold off for as little as $400.

"Slavery has no place in our world and these actions are among the most egregious abuses of human rights and may amount to crimes against humanity," Guterres told reporters.

"I am horrified at news reports and video footage showing African migrants in Libya reportedly being sold as slaves," he said, adding: "I abhor these appalling acts."

Guterres called on "all competent authorities" to investigate the slave auctions without delay, adding that he had asked the "relevant United Nations actors to actively pursue this matter."

Libyan Deputy Prime Minister Ahmed Metig said his UN-backed Government of National Accord would investigate the allegations, in a statement posted Sunday on the Facebook page of the GNA's press office.

Guterres wants Libyan authorities as well as the International Criminal Court, which has a mandate to open war crimes investigations in Libya, to look into the slave auctions, said U.N. spokesman Farhan Haq.

The U.N. chief has mobilized the U.N. high commission for human rights, his envoy in Libya Ghassan Salame, the U.N. office for drugs and crime, which has responsibility for human trafficking, and the International Organization for Migration, to take action, said Haq.

The images have triggered outrage from African leaders and calls for an inquiry.

Guinean President Alpha Conde, who is also chairman of the African Union, on Friday called for an inquiry and prosecutions relating to what he termed a "despicable trade... from another era."

President Roch Marc Christian Kabore has demanded information from Libya about the fate of some 30 Burkinabe migrants detained in the camps, said Barry.

Senegal's government expressed "outrage at the sale of Sub-Saharan African migrants on Libyan soil" that constituted a "blight on the conscience of humanity."

Niger's President Mahamadou Issoufou said the issue had made him "deeply angry" and urged Libyan authorities and international organizations to do "everything possible to stop this practice."

The U.N. Security Council will on Tuesday discuss human trafficking during a special debate expected to focus on the treatment of migrants in Libya.