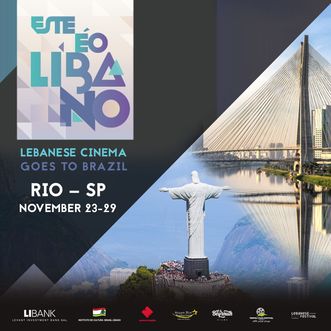 On the initiative of LiBank S.A.L. (Levant Investment Bank), in partnership with M.media, and in collaboration with the Lebanese-Brazilian Cultural Institute, and co-organization of Né a Beyrouth Films, Dream Box Productions and Tripoli Film Festival; The Panorama of Lebanese Cinema Festival (Este Eo Libano: Panorama Do Cinema Libanes) will be launching a first of its kind event in Brazil.

The festival, which will be held in Rio de Janeiro and Sao Paolo between 23-29 November, will open with screenings of the film "The Insult" by director Ziad Doueiri (special private screenings on 21 and 22 November). It will be joined by many other wide-ranging films from Lebanese cinema, including Maroun Baghdadi's "Out of Life”, the latest documentary by Hadi Zakak “Ya Omri (104 Wrinkles)”, Doueiri’s debut film “West Beirut”, Nadine Labaki’s “Where Do We Go Now?”, "Very Big Shot” by Mir-Jean Bou Chaaya, and Ziad Rahbani’s classic play “What About Tomorrow?” and many more.

Curation of films was carried out by a committee composed of representatives from Lebanon’s film industry. Members include Pierre Sarraf, Nibal Arakji and Elias al-Khallat. For a full of list of films that will be screened during the festival, please visit the following link: www.esteeolibano.com.br/index.php/agenda/

In order to serve the festival’s goal of opening a market for Lebanese cinema in Brazil, a delegation from Lebanon, including a number of Lebanese producers, filmmakers, and representatives from the Fondation Liban Cinema, will travel to Rio de Janeiro and Sao Paulo to participate in the festivities. There, the delegation will hold a number of meetings with Brazilian media and production companies in an effort to encourage the creation of joint production opportunities between the two countries, and to further promote the links of the Lebanese diaspora with its cultural roots through cinema.

The festival, as a joint initiative between LiBank S.A.L. and M.media, stems from their common vision that seeks to foster and promote lasting and productive connections between Lebanon and its diaspora. Employing the medium of film, this event promises to be a showcase of Lebanese culture that will further the goal of creating visceral and unbreakable links connecting the diaspora with their homeland.