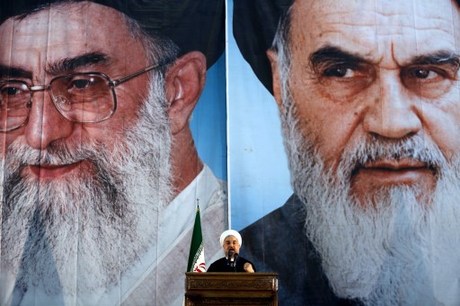 Here are key events that have marked Iran since the 1979 Islamic revolution that overthrew the monarchy.

On January 16, 1979 the U.S.-backed shah, Mohammed Reza Pahlavi, leaves for exile after months of protests against him.

An Islamic republic is proclaimed on April 1.

On November 4, 1979 pro-Khomeini students take 52 Americans hostage at the U.S. embassy in Tehran.

They are protesting the ex-shah's admission to hospital in the United States and demanding his return to Iran.

Washington severs diplomatic relations in 1980. The hostages are freed on January 21, 1981, after 444 days in captivity.

On September 22, 1980 Iraq invades Iran after its president, Saddam Hussein, tears up a 1975 treaty on the strategic Shatt al-Arab waterway, triggering an eight-year war that kills a million people.

The conflict, one of the longest and most deadly in the Middle East, ends on August 20, 1988 with a U.N.-brokered ceasefire.

Moderate conservative Akbar Hashemi Rafsanjani is elected president. Re-elected in 1993, he orchestrates a relative opening up of the regime and reconstruction after the war with Iraq.

Rafsanjani's reformist successor, Mohammad Khatami, runs up against conservative opposition during his two terms from 1997 to 2005.

In July 1999 the regime faces the biggest protests since 1979, with students who back Khatami clashing with police.

A series of bloody student demonstrations taints his presidency.

On January 29, 2002 U.S. president George W. Bush puts Iran on a list of "axis of evil" states with Iraq and North Korea, accusing it of backing terrorism.

Washington had already in 1995 decreed a total trade and financial embargo on Iran.

On June 25, 2005 ultra-conservative Mahmoud Ahmadinejad is elected president. In August he says Israel should be "wiped off the map."

During his terms, Iran begins uranium enrichment, alarming the West which suspects Tehran of wanting to make a nuclear weapon.

His re-election in June 2009 sparks a massive political crisis and a crackdown on nationwide protests that decimates the reformist movement.

The election of moderate cleric Hassan Rouhani on June 15, 2013 marks a warming of relations with Washington.

On September 27 Rouhani and U.S. president Barack Obama talk by phone, contacts unprecedented at this level since Iran's revolution.

An accord with world powers on Iran's nuclear programme is reached on July 14, 2015, ending 12 years of crisis and 21 months of negotiations.

It gives Tehran relief from crippling economic sanctions in exchange for limits on its nuclear programme.

In October 2017 U.S. President Donald Trump refuses to "certify" the accord.

In January 2016 Iran's regional rival Saudi Arabia and its allies break off or scale back their diplomatic relations with Tehran after a crisis prompted by Riyadh's execution of Shiite cleric Sheikh Nimr al-Nimr.

Since then Iran has been accused of interfering in the affairs of the Arab countries and of fanning conflict in Syria and Yemen.

On May 19, 2017 Rouhani is re-elected with the support of reformists and a majority of the youth vote.

However criticism mounts that he has not fulfilled his electoral promises and abandoned the poor with his austerity policies.