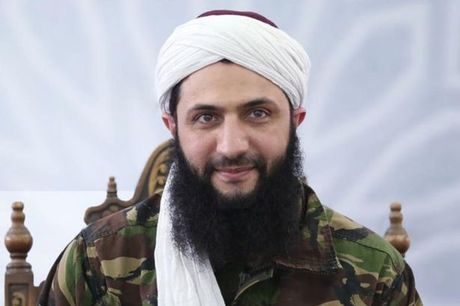 The head of Syria's leading jihadist alliance called on rebels Tuesday to "close ranks" to fend off a Russian-backed government offensive in the country's northwest.

It was Abu Mohamed al-Jolani's first audio recording since Russia claimed in October to have carried out an air strike that left the Hayat Tahrir al-Sham (HTS) commander in a coma.

Moscow is now backing a weeks-long assault by Syrian troops on HTS's stronghold in the northwest province of Idlib, and Jolani on Tuesday appealed to the fragmented rebel movement to unite against it.

"For 100 days, we have been fighting one of the fiercest battles on all levels," Jolani said in an audio statement released by HTS media.

Some opposition factions have long refrained from fighting alongside HTS, most recently because of a "de-escalation" agreement in areas including Idlib that was brokered by world powers in Astana last year.

Jolani blasted the Astana deal as paving the way for the current offensive, but said Syria's rebels could "overcome these crises, if we unite our efforts and close ranks."

"We are ready to reconcile with everyone and turn a new page through a comprehensive reconciliation... Let us preoccupy ourselves with our enemies more than with ourselves and our disagreements," Jolani said.

The jihadist leader said Syria's uprising was facing a "critical phase" as it nears its seven-year anniversary in March.

Rebels and hardline Islamists overran Idlib province in 2015, and it remains the only province in the war-ravaged country outside of regime control.

For the past two years, the jihadist forces behind HTS have steadily expanded their control in the province, with the influence of mainstream fighters shrinking drastically.

Syria's army launched its push for Idlib late last year and has since recaptured dozens of towns and villages in the province.

The United Nations said Tuesday it had recorded 200,000 cases of displacement since mid-December as a result of the intensifying assault.

Since it erupted in 2011, Syria's conflict has forced millions out of their homes, with many being displaced multiple times over, and more than 340,000 people have been killed.

Too little too late. Soon Salasism in Syria will go the way of the dodo and Santa Claus.