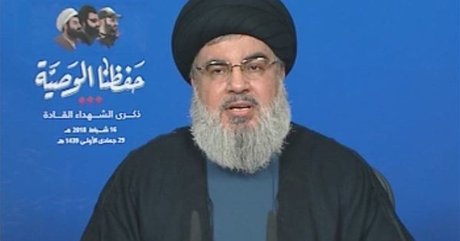 Hizbullah chief Sayyed Hassan Nasrallah on Friday warned the Lebanese state that the U.S. “is not an honest mediator” in the dispute with Israel over offshore gas drilling rights, urging it to show “strength” and “courage.”

“The Americans did not withdraw from eastern Syria because the most important oil and gas fields are present there... The Americans are overseeing the oil and gas battle,” Nasrallah charged.

Noting that the offshore oil and gas reserves could be Lebanon's “only hope for economic relief” and “salvation,” Nasrallah said “the unified official and popular stance is the most important factor to win this battle.”

“The Lebanese must not allow the devils to sow discord among them, and by devils I mean the Americans,” Hizbullah's leader added, referring to visits to Lebanon by U.S. Secretary of State Rex Tillerson and Assistant Secretary of State David Satterfield.

“State officials and institutions must rise to the level of confidence and responsibility regarding this critical file and they must show courage. The state should approach this file from a position of strength. Showing weakness would spell the end of the battle,” Nasrallah warned.

Pointing out that “the Americans know that Lebanon's only strength in this oil and gas battle is the resistance,” Hizbullah's leader warned Lebanese officials that “the Americans are not honest mediators, especially when the other party is the Israeli entity.”

“The state must deal with the U.S. mediator as being Israel's lawyer,” he cautioned.

And in Hizbullah's strongest warning to Israel since the beginning of the latest gas row, Nasrallah threatened that “should the Higher Defense Council decide that Israel's offshore oil installations should cease to operate,” Hizbullah “can disable them within hours.”

“Can anyone deny the presence of expansionist Israeli ambitions and threats against Lebanon?” Nasrallah added.

On the possibility of war, Hizbullah's leader said Lebanon “must remain vigilant and alert.”

“I'm not saying that we're heading to a war but vigilance is needed. What prevents Israel from waging a war is its inability to confirm in advance that it would emerge victorious,” Nasrallah noted.

Details of the U.S. mediation over offshore gas and oil rights are yet to be unveiled but Tillerson was in Lebanon on Thursday and the issue topped his agenda. Satterfield was on Friday holding talks with Lebanese officials over the matter.

The dispute dates back years but recently resurfaced when Lebanon invited companies to bid for drilling in areas near Israel's maritime border.

Commenting on the downing of an Israeli F-16 warplane during raids in Syria, Nasrallah announced that “Syria can defend itself,” describing the development as “a major military achievement.”

“The situation from now on will not be the same and Israel is no longer operating freely,” Nasrallah noted.

“Claims that the Israeli warplane was shot down by the Russians or the Iranians are empty claims. The decision to down the plane was taken by the Syrian leadership and President Bashar al-Assad,” Hizbullah's leader stressed.

Turning to Lebanon and the upcoming elections, Nasrallah emphasized that “Iran does not interfere in anything in Lebanon.”

“Iran does not try to impose presidents and premiers on Lebanon, unlike other countries... Iran does not detain a Lebanese premier,” Nasrallah added, referring to Prime Minister Saad Hariri's shock resignation from Saudi Arabia in November that was later rescinded.

Describing the new electoral law that is based on proportional representation as “one of the most important achievements in the country,” Nasrallah noted that “this law takes us to calm elections that do not stir strife in the country.”

“There will be no sharp rift and the elections won't be between two camps – March 8 and March 14 – but rather between several political forces that will form mixed lists,” Hizbullah's leader said.

“Hizbullah is not seeking the parliamentary majority in Lebanon,” he added.

Why does he always have to start with 2006? Move on.
And what victory? One more victory like that and we would have to live under a rock.

One more victory like that, and the zionist would be driven into the sea.

lol @ 'I have an ocean front property to sell you in Arizona';)

How do you measure victory ya irani? Is it when your infrastructure is turned into rubble, your airport bombed to hell, your ports under siege, and the enemy is occupying one third of your country?

Mastika ya kharra! Why don't you kick them out of chebaa!?

I will tell you why:
You are cowards!
You don't care about chebaa!
You want to keep financing coming from Iran!
If you attack you will loose!
Two Thirds of your elite troops died in Syria
The dog that barks does not bite!
Chebaa gives you a pathetic excuse to exist!

The only martyr from Hizballah is Lebanon's economy, future, independence, freedom, democracy and justice. True courage is when Shia reject this imported basij medieval radical ideology that is impoverishing and isolating them and support the Green Revolution movement in escaping tyranny of the Basij so democracy has a chance in Iran, what Iranians deserve.

The day you realize that America isn't your friend or ally, will be the day you discover your true courage and honor.

Until then you are dishonorable and bow down to American bastards.

Mastic... you language is the language of the weak... you bring in America, Israel, Zionists, isis, Daech, or the Aliens to justify your crap. We do not care about other countries, other planets or you delusions... stop sniffing that crap your party is so good at trafficking...

the day this evil iranian sectarian terrorist is brutally and violently murdered is the day we celebrate our true independence.

Sayyed Hassan should be the president because the Shias are the majority and the Saudi Taef accord stole their rights to appease the Christians.

I for one wouldn't want to be in Beirut or any area occupied by Hizballah 10 minutes after the first rocket hits Tel Aviv, or for all that matter, anywhere inside Israel.

Patience is not an option when your rights are usurped, it's a matter of principle. We have been marginalized for far too long.

They will raze Tell aviv just like they sunk Hanit in 2006 and downed the two seater F16 with the four pilots in it last week.

Yes yes... have hassan as the President... the Economy will flourish! Life will be beautiful! Women will hide in their homes! Investors will flow once again! Restaurants and discos will close. Fashin stores will close. Banks will collapse. Christians will flee. The Beach clubs: Closed. Bars: Closed Leisure Hotels: Closed Bars: Closed Art Galleries: Closed Casino: Closed YES!!! This is the Lebanon we ALLLLLLLLLL dream of..... yaaaaaaa zulfiquar...... what kind of good and progress did your people bring to this country??? Zero! Nada! Only destruction, war, pain, problems! Go to hell dude!

zulfiquar...
You were marginalized in the 70's... now give us a break1 Since Taef you are not anymore!
Nevertheless: YOU DO NOT contribute positively to society!!!
All the working brains, the educated, the investors are Christian and Sunni! Your people do not pay Electricity Bills, Threaten, embezzle, are lazy, are drug lords, war lords...
Wha=t do you think you deserve!? You want Lebanon because of your "numbers"!? One of yours is worth 200 of ours! GO TO HELL!

They are not a militia, militias fight in their own countries. They are mercenaries. The Ayatollah pays them to help him export the Islamic revolution, just like the Persian kings had mercenaries to fight their foreign wars. Take Bosnia for example after many years denying that they went there to fight the Serbs, as did other Jihadis including al Qa3eda, Nasrallah was caught admitting to it when one of his fighter called 2abu 3ala2 al Bosna, a Bosnian war veteran was killed in Syria. Nasrallah himself admits it when he said "wherever we need to be we'll be" it's not like he has his own money to go anywhere he wants. He couldn't even buy chewing gum from a Da7ieh shop let along go where he's needed. It's all Iranian money and for it Iranian handlers tell him when to go and where to go. He has no input whatsoever. That's how he started the 2006 war. He did not lie when he promised a calm summer he just didn't know the Iranians had other plans for him and us.

Turning to Lebanon and the upcoming elections, Nasrallah emphasized that “Iran does not interfere in anything in Lebanon.”

You mere sick existence is proof of Iran's interference in Lebanese affairs.

"extraterrestrial.alien Yesterday
They will raze Tell aviv just like they sunk Hanit in 2006 and downed the two seater F16 with the four pilots in it last week."

What exactly are you sniffing?
Hanit was not sunk and is still on active duty.
Two Seater F16, so how do you reach 4 pilots?