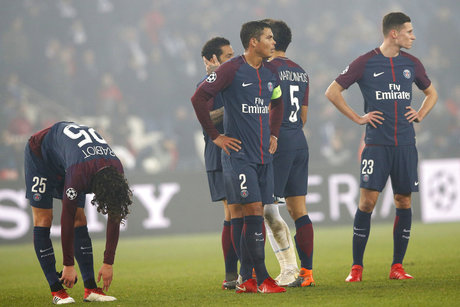 Paris Saint-Germain's Qatari-bankrolled bid to put themselves among Europe's elite foundered again as Cristiano Ronaldo's Real Madrid comfortably beat the French club to move into the quarter-finals of the Champions League.

Ronaldo administered the killer blow with a 51st minute header at the Parc des Princes on Tuesday that saw PSG's chances of pulling back a two-goal defeat from the first leg vanishing into the smoke from supporters' flares.

A scrappy PSG goal from Edinson Cavani was followed by the cherry on the cake for the defending European champions with Brazilian Casemiro's deflected goal.

As the ball looped into the net to complete a comfortable 5-2 win over the two legs, the half a billion euros a year that PSG's Qatari owners have pumped into the club since 2012 had once again failed to land the one prize they crave.

The absence of Neymar, the Parisians' star and a player who offered the best chance of unlocking the Madrid defense, was significant.

Having broken a toe in a league match against Marseille, the 222-million-euro signing watched the game in Brazil where he is recovering from surgery.

Neymar's future at PSG will be thrown into question by PSG's failure to progress to the quarter-finals of Europe's top club competition for the second successive year.

Marquinhos, PSG's Brazilian defender who is a close friend of Neymar, urged him not to turn his back on France with rumors rife that Real Madrid are prepared to break the bank to attract the former Barcelona player back to Spain.

"I ask him to stay and let things settle down," Marquinhos said. "He is an important player for us. We really need him to have confidence in our project, our players and our coaches."

Club president Nasser Al-Khelaifi said PSG had bowed to Madrid's superior experience at the highest level -- it was the eighth successive season that Real have reached the last eight.

"We know that Real have a lot of experience. We didn't do what we needed to do to win," he said.

The same point was hammered home by Marquinhos: "We need to grow in maturity as a team and show more strength in this kind of match."

Khelaifi insisted it was too early to make major changes, but Unai Emery, the Spanish coach who was given another chance by his Qatari paymasters after PSG spectacularly collapsed against Barcelona in the same competition last season, will surely be shown the door at the end of the season.

Emery previously won the second-tier Europa League three times with Seville but has never taken a club beyond the last 16 of the Champions League.

Mauricio Pochettino, the Argentine who has turned English club Tottenham into a force to be reckoned with this year, is the latest name to emerge as a possible replacement.

Ronaldo meanwhile will be laughing at those who speculated earlier in the season that at 33 his powers were waning.

The World Player of the Year scored twice to punish PSG's slack defending in the first leg in Madrid and his goal in Paris took him to a remarkable 117 in the Champions League, putting him 19 ahead of his eternal rival Lionel Messi of Barcelona.

In truth, the Champions League offers Madrid the only chance of silverware this season.

They have virtually conceded the Spanish title to Barcelona and have been knocked out of their domestic cup.

For PSG, there is just the scraps of a near-certain seventh French league title and both cups to look forward to -- scant consolation for a club that wants to conquer Europe.