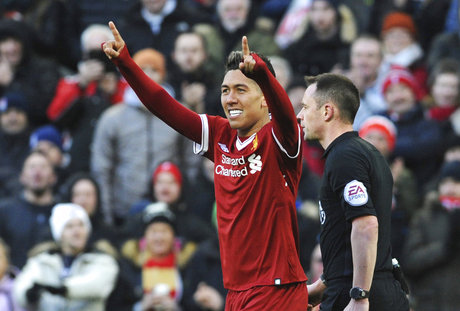 Roberto Firmino says Liverpool fear nobody in the Champions League and would welcome a clash against a fellow Premier League club in the quarter-finals.

Jurgen Klopp's side were the first English team to book their spot in the last eight with a goalless draw at home to Porto on Tuesday, giving them a 5-0 aggregate win.

Pep Guardiola's Manchester City are also through but Tottenham are out after defeat to Italian champions Juventus on Wednesday.

Manchester United, who host Liverpool in the Premier League on Saturday, and Chelsea both play their second-leg matches next week.

The Champions League quarter-final draw on March 16 is open, meaning no teams are seeded and clubs from the same national association can be drawn against each other.

"Yes, we'd like a draw against an English club. Why not?" said Brazil international Firmino, who has 22 goals this season and is part of a devastating front three at Anfield alongside Mohamed Salah and Sadio Mane.

"We have shown in the past few seasons we can beat all the English clubs. Our record is good against them.

"We feel we have played well against the top English clubs and shown we can beat them but we are not afraid of anyone in the draw."

Firmino, 26, is set to feature for Brazil at the World Cup in Russia but said first he is focusing on winning his first trophy with Liverpool.

"The season is not over, I have my objectives with Liverpool and I want to concentrate on them. If I can do well, then that will be important for my position in the (national team) squad."