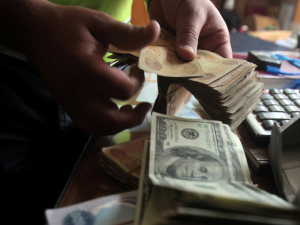 Wall Street came off to a stronger opening after the U.S. consumer price index (CPI) rose 0.2 percent in February, just as analysts had predicted, cooling from January's sudden jump of 0.5 percent which had sent markets around the world into a tailspin.

The dollar was also impacted by U.S. President Donald Trump's announcement that he was replacing his top diplomat Rex Tillerson ahead of announced talks with North Korea.

"The U.S. dollar weakens further in the aftermath of the Tillerson announcement," analyst Michael Hewson at CMC Markets tweeted.

The inflation data eased volatility on Wall Street, which breathed a sigh of relief Tuesday after fears of inflation and rising rates had spooked investors in recent weeks.

The Federal Reserve is expected to raise its benchmark interest rates next week in the first of at least three hikes expected this year -- but market watchers had been looking for signs the central bank could act more assertively.

The U.S. inflation data came after a strong jobs report on Friday and Trump's decision to meet North Korean leader Kim Jong Un, both of which had helped fuel a surge in global equities at the end of last week.

But worries about Trump's move over tariffs spiked as the "America first" administration singled out Europe in a rapidly escalating war of words.

Meanwhile, the London stock market also fell back as the pound strengthened even as finance minister Philip Hammond said the British economy would grow slightly more than expected this year.

Asian markets swung in and out of positive territory through morning deals Tuesday and by the end Tokyo was up 0.7 percent.