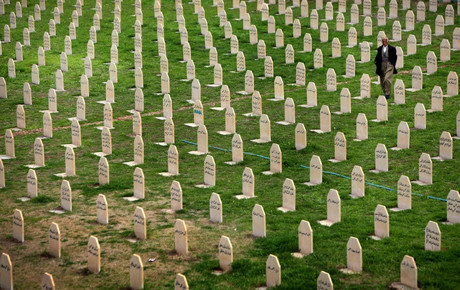 As a teenager Kamal Jalal saw two of his sisters killed when Iraqi dictator Saddam Hussein's forces launched a gas attack on the Kurdish town of Halabja.

Now three decades later at the age of 47 this Iraqi Kurd remains reliant on a machine to help him breathe -- and is still waiting for compensation over a massacre that became a byword for brutality.

"The doctors told me that I lost 75 percent of my lungs," he told AFP as he sat in his small home just metres (yards) from a memorial overlooking the town.

The monument with a Kurdish flag on top commemorates some 5,000 Iraqi Kurds, mostly women and children, killed on March 16, 1988 when deadly gas was released on Halabja in the mountains of northeastern Iraq.

The attack from the skies came after ethnic Kurdish fighters who sided with Iran in the eight-year Iraq-Iran war withdrew from the rural farming town.

Like many of the thousands of people gassed in Halabja, Jalal was hopitalised in Iran, which lies just a dozen kilometres (seven miles) away.

For him -- and others who got treatment in Europe paid for by Kurdish authorities -- the recent fight against Islamic State jihadists that wracked the region meant they struggled to travel to get the care they need.

- Struggle for compensation -The attack on Halabja marked the culmination of a ruthless campaign of retribution by Saddam against those seen as siding with Tehran as the devastating conflict between the two neighbours drew to a close.

The gruesome aftermath of the slaughter was captured by international journalists -- but it would take decades for there to be some sort of reckoning.

After his ouster in the wake of the 2003 US-led invasion of Iraq, Saddam eventually faced trial for the killings of an estimated 180,000 in the Anfal campaign against the Kurds.

But he was hanged in 2006 on another conviction before a court could officially find him guilty of carrying out a "genocide" against the Kurds.

Back in Halabja Arass Abed is spearheading the fight by survivors for compensation.

The 48-year-old is the only member of his family to have survived the attack and founded an association representing victims and their loved ones.

"The Iraqi supreme court ruled that the chemical attack on Halabja was a war crime and genocide," he told AFP.

"The government in Baghdad needs to compensate the victims and the town as a whole."

- Poisonous legacy -The local government of the autonomous Kurdistan region which controls Halabja did promise land for some 1,000 families impacted by the tragedy.

"Thirty years after the attack at least 200 families have still not received their land."

Abderrahman Abderrahim lost 48 members of his family in the attack.

But the former enviroment minister in the Kurdish authorities says that day was only the beginning of the problems.

"Up until today there is still residue from the gas that spread over the city, unexploded shells can be found under the foundations of recently constructed buildings," he said.

Worse, he adds, pollution has also spread to "fields around the town" which relies on agriculture as one of its main resources.

And the attack keeps on taking a toll on new generations.

"Every year in the census in Kurdistan, Halabja is the area where the largest number of cancer patients is registered", he says.

"There are also a significant number of newborns with complications and birth defects."