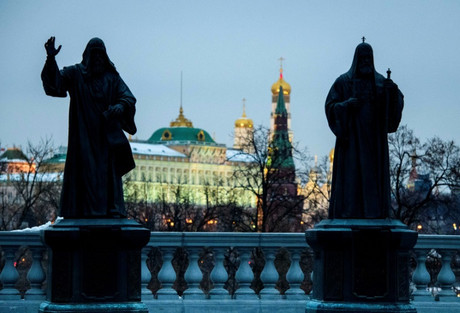 Russia announced on Saturday the expulsion of 23 British diplomats in a tit-for-tat move following London's response to a nerve agent attack against a Russian former double agent in England.

They are the latest sanctions by London and Moscow in spying affairs:

- The Cold War  -- In September 1971 Britain expelled a record number of 105 Soviet diplomats and officials after Moscow refused to clarify the activities of 440 of its citizens in Britain.

- In September 1985 Moscow and London engaged in a furious six-day exchange of spy expulsions, declaring a draw after 31 on each side had been sent packing. This followed the defection to Britain of the KGB's London station chief, Oleg Gordievsky.

- In May 1989, 11 Soviet diplomats and journalists were thrown out for spying. Meanwhile 11 Britons were sent home from Moscow in a tit-for-tat move.

- Post-Soviet era -- In May 1996 Britain ordered the expulsion of four Russians working at the London embassy, in response to the kicking out of four British diplomats from Russia.

According to Moscow, the Britons were in contact with a Russian working for British intelligence.

- In January, 2006 Moscow said it had uncovered four British spies who enjoyed diplomatic status and engaged in the alleged illegal funding of pro-democracy and human rights groups.

Russia's intelligence service accused British diplomats of involvement in a spy ring in which agents allegedly passed secrets through a high-tech communications system hidden in a fake rock in a Moscow park.

Russian President Vladimir Putin then cracked down on non-governmental organisations, forcing several of them to close down.

In January 2012 a former top aide to then British prime minister Tony Blair admitted that Britain had a spy plot involving a fake rock.

Litvinenko was poisoned in London in 2006 with the radioactive substance polonium-210, in the most notorious of a rash of suspicious deaths of high-profile Russian exiles in Britain.

In 2008 two branches of the British Council cultural organisation in St Petersburg and Yekaterinburg were then closed following pressure from Russian authorities for alleged tax irregularities.

In January 2016, after a British probe found that Moscow was responsible for the Litvinenko affair, the British government summoned Russia's ambassador, and froze the assets of Lugovoi and a second suspect, Dmitry Kovtun.