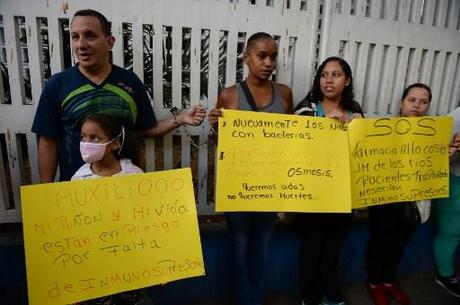 A country-wide survey showed that 88 percent of all medicines were missing from pharmacy shelves, while 79 percent of the most basic medical equipment was unavailable.

"Venezuelans who have to go to hospital have to buy everything," lawmaker and doctor Jose Olivares told a press conference in Caracas.

"There is an 84 percent shortage of catheters and probes, which are basic materials in any hospital."

Four out of five hospitals had problems with their water supply, and more than half -- 53 percent -- of operating theatres, as well as 94 percent of X-ray machines, did not function.

"Behind every number, there is a father, a mother, a Venezuelan who suffers. I hope the government reflects," Olivares told reporters.

The report said 22 percent of emergency rooms are out of service, while 70 percent have failures and work only intermittently.

The survey was conducted in 137 hospitals in 21 of the country's 23 states, including Caracas, said Julio Campos of Physicians for Health, which led the survey with Congress.

Venezuela's crushing economic and political crisis has caused widespread shortages of food and basic medicine, and has left a nation of 31 million people without access to proper health care.

Ordinary Venezuelans are struggling with hyperinflation that the International Monetary Fund projects will climb to 13,000 percent this year, amid a deepening economic crisis sparked by a fall in oil prices.