The Sorbonne Takeover that Symbolized France's May 68 Unrest 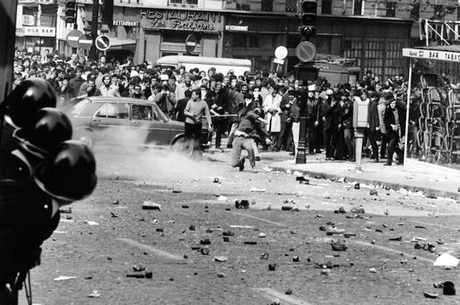 The student occupation of the venerable Sorbonne university in Paris proved a beacon in the events of May 1968 when France was gripped by unprecedented social unrest.

From March students at universities around the capital had held low-key protests over a range of ideals -- against the Vietnam War, for more freedoms, anti-capitalism.

When these universities were closed, many students gravitated to the renowned Sorbonne in Paris's ancient Latin quarter of learning.

On May 3 police entered the institution and rounded up 600 young protesters, sparking days of clashes in which hundreds more were wounded and arrested.

The university was shut down for several days. When it reopened, students flocked back and launched an occupation that would last more than a month.

Slogans scrawled on the walls were expressive -- "Don't turn around God, the world is crumbling behind you", "The more I make revolution, the more I want to make love". Alongside were portraits of Mao, Che Guevara, Trotsky.

Here are extracts from AFP reports at the start of the occupation and at its end.

- Students take over the Sorbonne -

PARIS, 14 May 1968 (AFP) - The Sorbonne is occupied. After eight days of self-imposed silence, the bastion of a traditional university has for the past 20 hours been transformed into a continuous and passionate forum of debate.

Every lecture hall is packed with hundreds of young people -- spilling over from the seats onto the steps and into the corridors -- who have been debating for hours without let up the problems of the university and society.

Speakers come one after the other amid the brouhaha of applause and boos. "University as critic" is the theme in the Richelieu lecture hall; "Workers struggle, students struggle" is discussed in Descartes hall; "The international student movement" in Guizot hall; "Powers in the university" in Michelet hall.

"It is forbidden to forbid...," is written in large letters on the centuries-old walls of the Sorbonne. Red flags fly atop statues in the courtyard of venerated past scholars, such as Victor Hugo and Louis Pasteur.

On the steps, in front of an audience of people stand alone in reflection or gathered in groups, a jazz quartet plays over the debate.

In the evening the frescoes in this courtyard were the focus of one of these discussions. Those in favour of their preservation clashed with those who wanted to use them to write up their propaganda. Each group triumphed over the other in turns.

First the old frescoes were covered with a pithy inscription in big brush strokes of oil paint: "Comrades, humanity will never be happy until the last capitalist is hanged by the guts of the last bureaucrat".

Eventually the traditionalists and the turpentine win the upper hand and the inscription disappears just before midnight.

Everything seems already organised to ensure the occupation is not just for one night. In the hallway that gives onto the Rue des Ecoles there are free supplies of food and fruit juice that have been collected from the public over the day.

PARIS, 16 June 1968 (AFP) – A single red flag flies above the Sorbonne, now emptied of its occupiers. It is a banner that students had placed at the start of their occupation on the far end of a cross on top of the dome, around 30 metres (100 feet) high.

This remaining flag could not be taken down. A fireman who tried said that with the light rain making the rooftops slippery, it would be dangerous to reach the cross. His bosses asked him to leave the last red flag.

At 8 pm police searches of the whole building were over. The last occupants of the Sorbonne had been discovered, a young couple found in a small lecture hall. The man and the woman, their bodies intertwined, were fast asleep. They had no idea police had entered the university and had to be woken up to be told the news. Totally dazed, they followed the police and were allowed to go free.

Police piled up in the courtyard the various objects they had found in their search of the lecture halls:

- medicine from the infirmary;

- and also, of course, hundreds of leaflets.

No firearm was found.

The search operation was over. The police chiefs and their inspectors are still gathered in the courtyard but they should be leaving the Sorbonne soon.