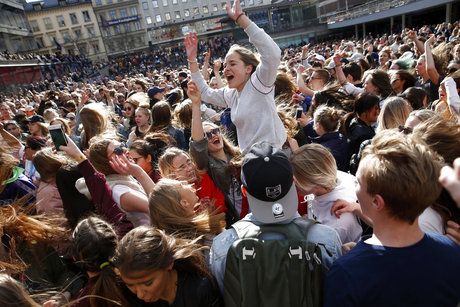 The Swedish DJ's death Friday at age 28 marks a symbolic coming-of-age for a genre that remains resolutely youthful, with the first electronic superstar to die near his prime.

Avicii, the stage name of Tim Bergling, was not a first-out-the-door pioneer of electronic dance music -- or EDM -- a scene that has exploded since the turn of the century and last year was worth $7.4 billion, according to a study by the industry's International Music Summit in Ibiza.

But Avicii both showed the mainstream possibilities of EDM -- and, by the end of his short life, had already become a sage elder who cautioned about the artistic and commercial overreach of the music.

Avicii came to define the new age of radio-friendly EDM in 2011 with "Levels," which entered the top 10 across Europe with its sample of soul great Etta James in between synthesizer riffs that soar with stadium-packing power.

But perhaps his most influential moment came in 2013 when he headlined the Ultra Music Festival in Miami. A year after he invited Madonna as a surprise stage guest, Avicii befuddled a crowd of ravers by bringing out a bluegrass band with a banjo for his soon-to-be-hit "Wake Me Up."

In an interview shortly afterward, Avicii warned that EDM was moving too quickly into a sound too hard and unmelodious, saying that audiences would soon tire of it.

"Since it got so big in America the past couple of years, dance music is taking over everywhere," Avicii told the London Evening Standard. "It's important that it keeps changing so it doesn't become a fad."

"Wake Me Up" may now be remembered for more than the banjo twist. The track, featuring singer Aloe Blacc, reflects on aging with the line, "I wish I could stay forever this young."

Like other musicians who died with so many years ahead of them, Avicii looks destined to be remembered with an aura of tragedy. He retired from touring in 2016 as he suffered health problems including acute pancreatitis, triggered in part by excessive drinking.

Avicii, who acknowledged his problems in the sole lyric to the song "Alcoholic," died while on vacation in Oman. The cause remained unclear, although police sources in the Gulf sultanate did not suspect foul play.

The electronic music world has been struck by few other deaths. House music forerunner Frankie Knuckles and New York party organizer David Mancuso have both died in recent years, but both were considerably older.

Avicii -- a stage name derived from the Sanskrit for the deepest stage of hell, the inverse of Cobain's Nirvana -- had spoken of being an introvert who was never comfortable with the hard-partying lifestyle of a DJ, for whom alcohol was always available and usually free.

But could his death also amount to a turning point for EDM? Late in his life, he appeared to think the scene was on a wane.

"EDM started getting oversaturated four, five, six years ago, when money became everything. From that point, I started mentally not wanting to associate myself with EDM," he told Rolling Stone magazine in September.

After retreating to the studio, he last year released an EP whose singles included "Lonely Together" featuring singer Rita Ora -- Avicii's soundscape accentuating a tight pop song with none of the booming synthesizers of EDM anthems.

But there are limited signs of an imminent bubble in EDM. Calvin Harris, the top-paid DJ, earned $48.5 million last year, according to an estimate by Forbes, and the rise of streaming subscriptions has helped bolster the industry's overall earnings.

Kygo, another leading DJ, closed his set Friday at the Coachella festival in California with a tribute to Avicii, to whom he credited his decision to pursue electronic music.

"I know he's inspired millions of other producers out there," Kygo said.