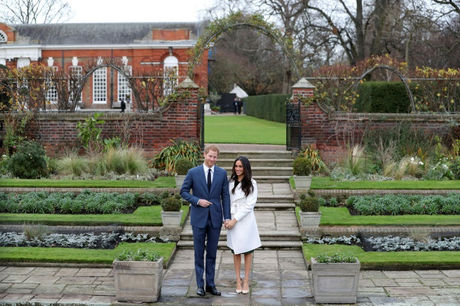 An imposing red-brick mansion adjoining central London's Kensington Gardens and Hyde Park, the palace and its grounds are home to 15 members of the royal family.

They include Queen Elizabeth II's cousins Prince Richard, Prince Edward and Prince Michael, who are all aged over 70.

But the balance is gradually shifting towards the younger royals, who are making the palace their favourite nest.

Princess Eugenie, 28, the younger daughter of the monarch's second son Prince Andrew, is due to marry her socialite fiance Jack Brooksbank in October.

They are currently making a marital home of Ivy Cottage in the palace grounds, joining her cousins William and Harry on the list of residents.

Originally a simple manor, the palace was acquired in 1689 by king William III who, concerned about his fragile health due to asthma, chose the building because it was located in lush greenery, at the time away from the polluted city.

It became the favoured residence of British monarchs during the following decades.

After the death of king George II in 1760, Kensington Palace was made available to secondary members of the royal family.

It was there that queen Victoria was born and grew up -- famously in virtual isolation -- before her accession to the throne in 1837.

She later resisted attempts to turn the palace into a museum but opened up certain spaces to the public.

Nicknamed the "aunt heap" in the 1920s due to its ageing royal population, it received a youthful resurgence in the 1960s, welcoming new residents including the family of princess Margaret, Queen Elizabeth's sister.

And today, a new generation is giving Kensington Palace a fresh lease of life.

Harry, 33, and 36-year-old Meghan, who will marry in Windsor on May 19, live in the cosy and "modest" Nottingham Cottage, a clubhouse located close to the main building consisting of two reception rooms and two bedrooms.

The cottage was the home of 35-year-old William and his wife Kate before they moved to the palace proper, into a much-renovated Apartment 1A -- the former home of Margaret, who died in 2002.

They live in the vast suite of rooms with their children Princes George and Louis and Princess Charlotte.

It is a homecoming of sorts for William and Harry, who spent a period of their childhood living in Apartments 8 and 9 with their parents Prince Charles and Diana, princess of Wales.

Diana stayed on in the apartments after their split and the palace has a memorial garden dedicated to her.

There are signs of renovation work in the 20-room Apartment 1, leading to speculation that it was being spruced up for Harry and Meghan to take over.

However, Kensington Palace has said this is not the case and they are staying put in the snug Nottingham Cottage.

In addition to the famous residents, Kensington Palace also houses some 40 staff as well as receiving visitors.

However, there is little chance that tourists will strike it lucky and cross paths with any royals -- the building is well compartmentalised to guarantee their privacy.